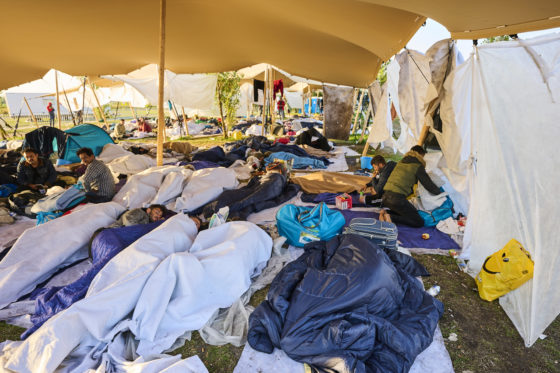 The deteriorating situation was underlined on Wednesday when a three-month old baby died in a sports hall being used as an overspill centre for new arrivals.

The asylum accommodation service COA said it was ‘deeply shocked by this terrible event’, but would not comment on the circumstances of the infant’s death while an investigation is ongoing.

Médicins sans Frontières (MSF) will start work on Thursday to provide medical and psychological care to refugees in Ter Apel, which is the first port of call for anyone seeking asylum in the Netherlands.

In recent weeks up to 700 people have slept outside the gates of the facility because there is no space inside, where there is an official limit of 2,000 places.

On Wednesday the regional safety board ordered all tents and makeshift shelters to be removed because of security concerns. As tensions grow fights have broken out outside the camp, with people using knives and improvised weapons such as tent pegs.

‘AzG has existed for 50 years, but this is the first time we have provided emergency aid in the Netherlands, and we’re doing it because the Dutch government has asked for it.’

The agency said it had found people with chronic illnesses, pregnant women and children among those sleeping outdoors. Some had run out of medicine for their condition, while others had developed skin conditions after not being able to wash for a week.

‘If this situation continues it will lead to serious medical emergencies,’ Sargentini told the AD.

The Red Cross closed its humanitarian service point on Wednesday for the second time in a week after being overwhelmed with enquiries.

A spokesman said more staff were needed to cope with the extra demand and it was not clear when the service point would reopen. Last week it was closed because the Red Cross was concerned about the safety of its workers after fights broke out at the camp.

The organisation warned back in June that the situation at Ter Apel was ‘inhuman and untenable’, with refugees not having access to food and water for hours.

The safety council said it had ordered tents outside the gates to be removed because they could be used to store weapons or illegal substances. The beige overhead covers put up by the COA will remain in place.

Other security measures have been stepped up after the municipal council in Westerwolde issued an emergency order giving police wider powers to stop and search people at the centre and increasing the use of security cameras.