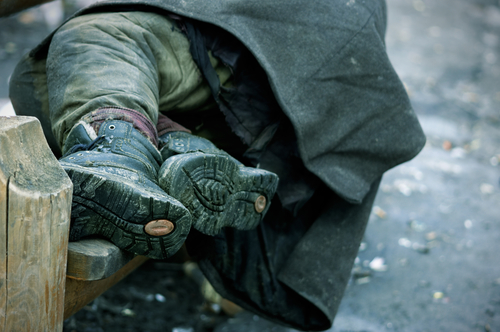 A plan by junior health minister Maarten van Ooijen to provide short term, basic accommodation to EU workers who lose their job and housing is flawed because it goes against European rules, a legal expert has told Trouw.

Van Ooijen’s plan, meant to rectify the lack of accommodation for homeless EU workers, recognises three groups. Those who have lost their job no more than six months ago will be offered basic accommodation and will be helped to look for a job.

People who have been jobless and homeless for up to two years will be eligible for help but will be encouraged to go home. And finally, people who have been on the streets for over two years can be declared ‘undesirable’ because their likelihood of finding work is minimal, for instance, because of drug addiction.

The distinction the junior minister makes between homeless workers’ periods of  unemployment does not make any difference in European law, university lecturer and EU civil rights expert Dion Kramer told the paper.

‘A Romanian worker who loses his job after slogging away at a slaughterhouse for 18 months and becomes a homeless addict will, according to EU law, retain his status as a employee for an undetermined period. And that means the Netherlands must help him get clean instead of sending him home,’ Kramer said.

The plan also states that local councils are not required to give these workers the right to benefits and accommodation. That too is against European rules, Kramer said.

A spokesman for the ministry said the the three categories are ‘a workable translation of EU law and jurisprudence.’  According to Kramer the ministry has been ‘cherry picking the EU rules’ resulting in a ‘legal mess’.

There is mounting criticism of the way EU nationals who come to the Netherlands to work, often doing seasonal or poorly paid jobs in greenhouses and meat processing, are being exploited.

In May, the social affairs ministry inspectorate warned that people moving to the Netherlands to do low-skilled work are living in ‘increasingly miserable conditions’ and that Dutch firms are opting to use cheap foreign workers rather than innovate or improve working conditions.

Long hours, high productivity pressure, hard physical work and uncertainty about accommodation are combining to create ‘an impact on physical and mental health on a scale which we didn’t anticipate’, said researcher Inge Goorts of health expertise centre Pharos.

However, so far nothing has been done by the government to implement the measures.