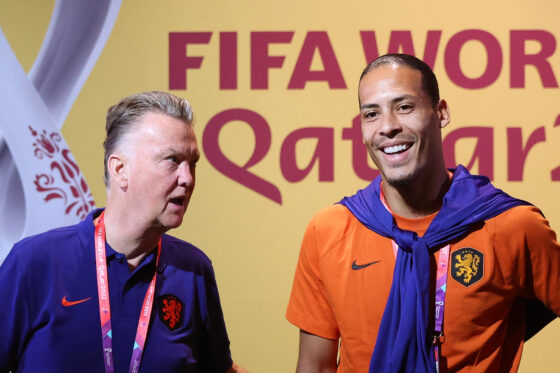 Virgil van Dijk will not wear the OneLove armband for the Netherlands’ opening World Cup match against Senegal after football’s world governing body FIFA said players would receive a yellow card for displaying it.

The captains of seven European teams, including Oranje, had intended to wear the rainbow armband in support of LGBTQ rights at the tournament in Qatar, where male homosexuality is illegal.

The Netherlands, Germany and England were among the teams who said they would pay a fine rather than abandon the gesture, but the threat of a booking in the first minute has forced a change of heart.

Two days ago the Dutch football association KNVB rejected FIFA’s offer of an alternative armband with other slogans such as ‘save the planet’ and ‘education for all’. ‘It’s nice, but this initiative is a bit late,’ said spokesman Jaap Paulsen. ‘We’ve decided we’re going to use our own One Love armband.’

The KNVB said in a statement that it had petitioned FIFA since September 19 to allow the armband to be worn on the field and was only informed yesterday that a yellow card would be the sanction.

‘We deeply regret that we have not managed to come to a reasonable solution together,’ the statement said. ‘We stand for the One Love message and will continue to promote it, but our number one priority at the World Cup is to win matches.’

Van Dijk said on Sunday he would be uncomfortable having to start the match on a yellow card, which would put him at risk of being sent off for a minor offence. Players who are booked twice in the first four matches will be suspended for the next game.

‘I don’t fancy playing with a yellow card to my name and certainly not if it’s preventable,’ he said.

LGBTQ rights campaign group COC Netherlands has reacted furiously to Fifa’s decision. ‘It shows how completely in the wrong Fifa is,’ a COC spokesperson said. ‘First you assign the tournament to a country where human rights are not a priority. Then you justify that. And then you make it impossible for people who do find human rights important to speak out about it.’

The Dutch will start their opening group match with Memphis Depay on the bench, as the Barcelona forward has only just recovered from a hamstring injury that put him out of action for two months.

As anticipated, Louis van Gaal is giving a debut to Heerenveen goalkeeper Andries Noppert, making him only the second Dutch player to win his first cap at a World Cup finals tournament.

Senegal will be without their star striker, Sadio Mané of Bayern Munich, but the African champions are still expected to be the toughest opponent in a group that also includes Ecuador and Qatar. Ecuador won the opening game between the two countries on Sunday night by a 2-0 scoreline.