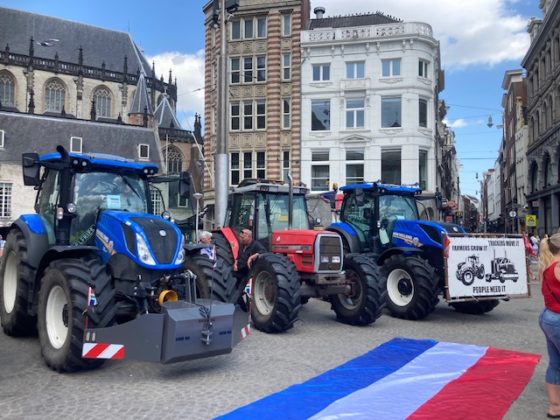 Farmers staged a series of protests against the plans over the summer. Photo: DutchNews.nl

The prospect of compulsory buyouts for Dutch farmers to cut nitrogen pollution has moved closer after a report found that the government’s voluntary scheme was based on unrealistic targets.

The cabinet wants to reduce the total number of cattle in the Netherlands by paying livestock farmers to give up as it seeks to halve nitrogen compound emissions by 2030. It has set aside €7 billion to compensate farmers who give up their businesses.

But the Netherlands Environmental Assessment Agency (PBL) said previous buyout schemes in the last 25 years had only cut the total head of cattle by a few percentage points, far less than the 30% cited in an earlier PBL report.

In an unpublished report seen by NRC, it said the government needed to keep the option of compulsory purchases open – while also warning that the unprecedented move was likely to be challenged by farmers in the courts, with cases taking up to 10 years to conclude.

‘The high expectations regarding the termination of livestock farms do not appear to be rooted in a systematic insight into the effects of termination regulations,’ the PBL said.

Two weeks ago NOS revealed that just 20 out of 750 farms that were eligible for a voluntary buyout scheme administered by provincial governments had taken up the offer.

The PBL reinforced the view of Johan Remkes, the troubleshooter brought in to lead talks with farmers over the summer, who said two years ago that the ‘general voluntary regulations’ would not go far enough.

Remkes is due to publish his recommendations on Wednesday as to how the government can resolve the impasse with farmers who have resisted all efforts so far to reform the agriculture sector.

The cabinet needs to reduce emissions to comply with European regulations requiring it to protect conservation zones known as Natura 2000 areas, which formed the basis of a ruling by the Council of State in 2019.

But compulsory purchases are a red line for farmers, who have staged mass protests, vandalised infrastructure and picketed ministers’ houses for the last three years as they try to press the government to change course.

The PBL also questioned whether a voluntary scheme was the most efficient use of resources. The report said it would be ‘increasingly difficult and expensive to entice the more profitable businesses to participate.’

In the past buyout offers were mainly taken up by older farmers with no prospective successor lined up, but the current targets required the government to prioritise farmers who are located closest to Natura-2000 zones. The further away the farm is from a conservation area, the smaller the effect is on pollution levels, the PBL said.