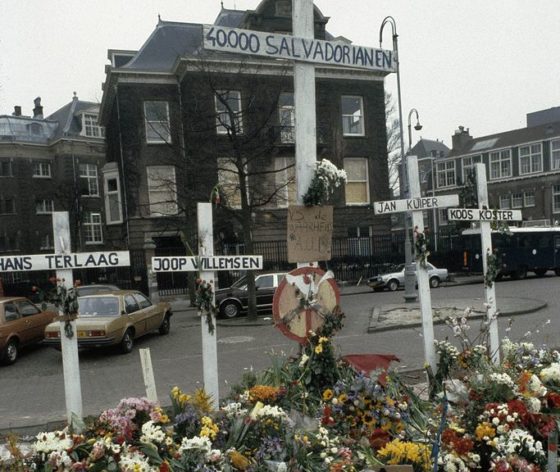 The authorities in El Salvador have arrested two people in connection with the murder of four Dutch journalists in 1982 and asked the US to extradite a third, according to television current affairs show Zembla.

Koos Koster, Jan Kuiper, Joop Willemsen and Hans ter Laag were in El Salvador in 1982 to report on the bloody civil war there and were killed by government soldiers when trying to enter an area of the country held by guerrillas.

The two who have now been arrested are former defence minister Guillermo Garcia and Francisco Antonio Morán, who was the chief of a special police unit at the time, Zembla said. Morán lived in the US until 2016 but was then deported because of his role in human rights abuses in El Salvador.

The two will appear in court in Chalatenago on Monday, Zembla said.

In 2018, Zembla revealed a third man, Mario Reys Mena, who is said to have given the order to kill the four, was also living in the US. El Salvador has now asked for his extradition, Zembla said on Sunday.

The official version at the time was that the four journalists, who worked for now defunct broadcaster Ikon, had been killed during an exchange of gunfire between guerrilla fighters and the army.

But the 1993 UN investigation found that the murder had been premeditated and the four were ambushed when they were on their way to guerrilla territory.

Up to five years ago, an amnesty was in place that made it impossible to take legal action against the soldiers but that law was torn up in 2016.