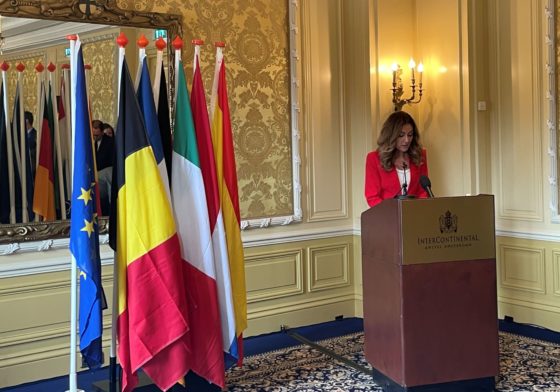 Dutch justice minister Dilan Yeşilgöz dismissed the idea of legalising cocaine at a meeting of six European countries who have formed a coalition to fight organised crime.

At the event in Amsterdam, Amsterdam mayor Femke Halsema told visiting ministers from Belgium, France, Germany, Italy and Spain that the ‘war on drugs’ wasn’t working and said she was convinced that legalising and regulating the drug market was the only way forward.

‘By criminalising the supply and the demand, we are only helping the criminal market,’ said Halsema, who has pledged to crack down on the criminal supply chain of coffeeshops and is convinced banning tourists will help.

‘Regulating smoking and alcohol has shown that it is possible to control the market for dangerous products, while also reducing damage to health. To be honest, in my heart I’m convinced that the best result for our society can be achieved by decriminalising cocaine and regulating the market.’

‘The idea of legalising drugs was an interesting point of discussion,’ said Yeşilgöz after the meeting. ‘But the fact is that the market for more than 90% that comes into the Netherlands isn’t here.

‘It’s a philosophical discussion, a theoretical discussion and it could be a political discussion – but if you do it as a country, say, as the Netherlands, then you have tackled your share of criminality, but the market isn’t here.’

‘People listened…but we were looking at what was practical. That kind of discussion only has effect if it’s worldwide, and that is not the case. The problem we have is so big and so urgent that I would rather focus on what we can do than subjects where we can’t do so much.’

At the meeting, the six countries agreed to increase co-operation in fighting international drug crime, creating a platform to share information from logistical hubs that act as gateways to Europe; establishing a task force with Latin American countries and other transit sites; stepping up screening for financial constructions exploited by criminals and working harder on proactive prevention.

Yeşilgöz said she was convinced that privacy laws and crime fighting were not mutually exclusive, and that good strategies could encompass them both.

‘Crime never sleeps so neither can we, but in order to be successful we must act together,’ she said.

Another meeting of ministers is planned for spring 2023 in Antwerp.