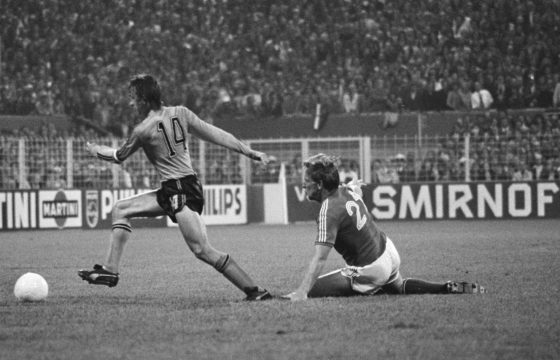 Johan Cruyff against Sweden in the 1974 World Cup. Photo: Wikipedia/Anefo

Nearly half a century after the Dutch thrilled the world at the 1974 World Cup, Johan Cruyff’s best known move has been immortalised in the Oxford English Dictionary.

The ‘Cruyff turn’ is one of 15 phrases from football to be included in the latest update to the OED, along with ‘total football’, the style of play associated with Ajax and the Netherlands in the early 1970s. The Amsterdam club won the European Cup three times in a row between 1971 and 1973.

Cruyff’s most famous turn came in the Netherlands’ match against Sweden in 1974, when he turned defender Jan Olsson inside out on the edge of the penalty area to create space to run to the goal line.

Footballers from parks to professional leagues have tried to copy the move ever since, which involves dragging the ball behind the standing leg before turning and running away behind the defender’s back.

Cruyff himself played down the significance of the move, which became one of the most frequently played moments from the tournament. ‘I never did tricks,’ he said. ‘There was an opponent there so I had to outplay him. That was the easiest way.’

The match ended 0-0, but the Dutch went on to reach the final before losing 2-1 to West Germany. Cruyff scored three goals and was named player of the tournament.

Other footballing terms included in the OED for the first time include ‘Panenka’, a way of taking penalties that involves chipping the ball over the diving goalkeeper, ‘tiki-taka’, referring to the short passing game devised by Spain and Barcelona from the late 200s, and Gegenpressing, the German word for a style of play that involves constantly pressurising the opposing team when they have the ball.