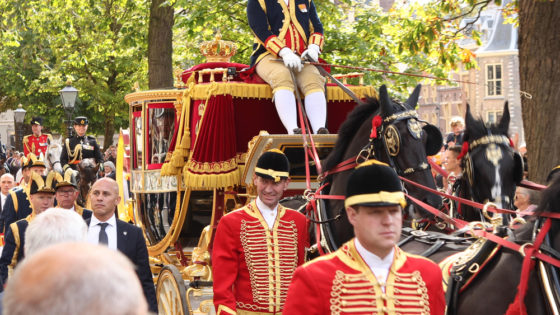 The king travels to parliament by coach. Photo: Depositphotos.com

The government presents its 2023 spending plans to parliament and the public on Tuesday. Here’s what you need to know.

Prinsjesdag, the day when the king opens the new parliamentary year and the government publishes its plans, has taken place on the third Tuesday in September since 1887. For the past two years, the pageantry has been limited by coronavirus, but this year the rituals are back again.

The day’s events kick off at 1pm when king Willem-Alexander and queen Maxima travel from Noordeinde palace to the Koninklijke Schouwburg theatre in a horse-drawn coach.

At the theatre the king will address the members of the upper and lower houses of parliament, plus the diplomatic corps, and outline the government’s plans for the coming year. Reading out the troonrede (speech from the throne), which is written by the government, is one of the monarch’s main ceremonial jobs.

The speech is traditionally given in the splendour of the Ridderzaal, or knight’s chamber, but will take place at the theatre this year because the parliamentary complex is undergoing major renovations.

Nevertheless, the hats worn by female guests – the hoedjesparade – are likely to provide much fodder for the gossip columns, as they do every year. Nu.nl has already been speculating about what princess Amalia, who is attending the troonrede for the first time, will wear.

After the speech, the royals will return to the palace by coach and appear on the balcony with other members of the family, including Amalia, to wave at the crowds at around 2pm.

At 3pm, finance minister Sigrid Kaag will present the budget memorandum, or rijksbegroting, to parliament. The paperwork is always delivered in the same briefcase, a tradition which started in 1947, but Kaag will be the first female minister to carry it. 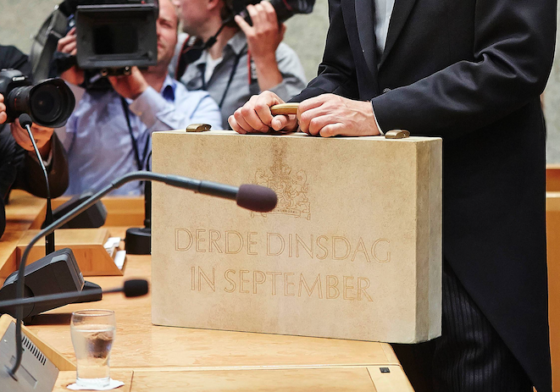 The all-important briefcase with the budget plans. Photo: Finance Ministry

The rijksbegroting literally means state budget and sets out how much money each ministry has been allocated for the coming calendar year and what the spending priorities are. A close cousin to the rijksbegroting is the miljoenennota which is the breakdown of the finances, outlining the economic and financial situation in the country.

A third document is the annual macro economische verkenning (MEV) or macro-economic outlook, which is drawn up by the government’s economic policy advisory agency CPB. It contains all the forecasts which ministers have used to work out their spending plans and calculates what the effect of those policies is likely to be.

Spending power is always an obsession but will be even more so this year. Another Prinsjesdag tradition is the way much of the budget is always leaked to the media in advance, and 2022 is no exception.

On the Wednesday and Thursday after the formal presentation of the budget, MPs debate the main socio-economic points with the prime minister and finance minister in the Algemene Politieke Beschouwing, which is seen as the most important parliamentary debate of the year.

Opposition leaders will come up with their own alternative budgets and argue for changes to the government plans. The government always agrees to include some of their measures.

In the following weeks, each ministry’s spending plans will come under the spotlight in a two-day debate with each individual minister in the hot seat.

As the debates progress, legislation based on the plans will be drawn up and voted on – and often little remains of the original idea. This year the changes are likely to particularly acute, given that the coalition does not control the upper house of parliament and will have to make concessions to the opposition parties to get their plans passed.

There is also usually a rush to get key changes to the law signed and sealed before the end of the year.

Dutch News will publish a summary of the king’s speech and round up of the government’s main plans on Tuesday afternoon.