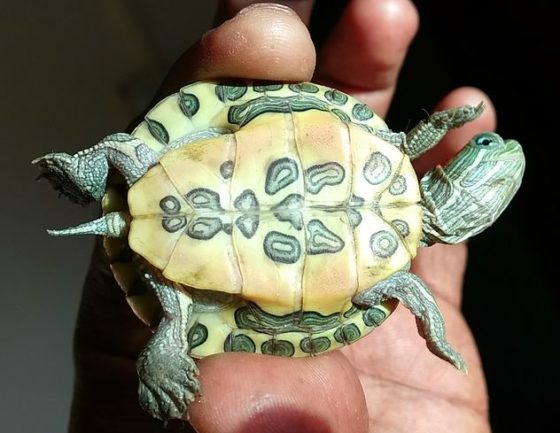 Some 200,000 turtles have been dumped in the Netherlands since a 2016 law banning people from breeding and trading them was introduced, animal rescue organisation Faunawatch has said.

Some will die a slow death because of lack of food, the organisation, which is opening a rescue centre for tortoises next month, said. Others, the red-eared slider (Trachemys scripta elegans) in particular, are more successful and are considered an invasive species in most of the European countries where they have been set free.

The red-eared slider can carry diseases harmful to other aquatic species as well as people and is a threat to indigenous tortoises, such as the European pond turtle (Emys orbicularis).

It also digs into dykes, which makes its presence particularly harmful in the Netherlands.

Before the ban, tens of thousands of terrapins year were sold and traded, often ‘bought as cute mini turtles in shops or at fairs,’ a spokesperson for the organisation told RTL Nieuws.

Once the terrapins grew bigger, disenchanted owners dumped them in ponds and streams because they had no place to take them, he said.

The new centre, which is located in Maastricht, comprises six ponds, as well as five ‘observation ponds’. The semi-aquatic animals, some of which can live for 40 years, will stay there for the rest of their lives.

The ponds are situated in the grounds of a psychiatric hospital and the patients can help look after the animals, RTL reported.