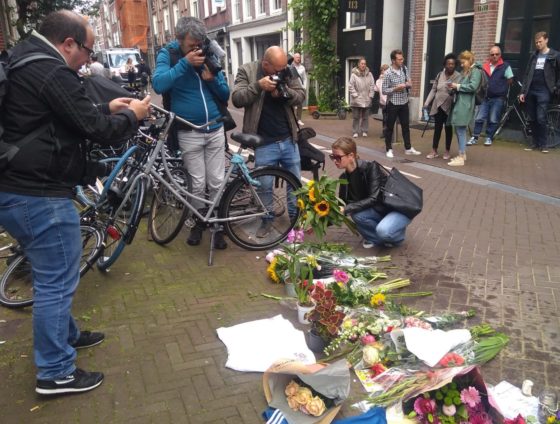 The murder trial for crime journalist Peter R. de Vries may have to be redone because one of the judges has moved abroad.

The judge had planned her relocation until after the verdict was scheduled in July, but the court postponed its decision after new evidence came to light. A replacement judge has since been appointed but the law requires the case to be heard again, unless the parties can agree.

The De Vries family is unhappy at the prospect of a retrial. ‘It’s curious,’ De Vries’ son Royce said of the lack of a back-up judge when speaking with reporters after the hearing.

During a earlier hearing he described his father taking him to football practice as a child and, together with other relatives, has requested nearly €400,000 in compensation for their shock and emotional loss.

Prosecutors say Delano G, a 22-year-old from Tiel, shot de Vries five times as he was walking to his car on the Lange Leidsedwarsstraat in Amsterdam in July 2021 while 33-year-old Polish national Kamil E drove the getaway vehicle. The prosecution has demanded a life sentence for both men.

At the time of his death, de Vries was acting as an official confidant to Nabil B., a key crown witness in the Marengo case, in which suspected gang leader Ridouan Taghi and 16 other men stand accused of commissioning assassinations in the Dutch underworld between 2015 and 2017.

A court spokesperson said that the parties are in talks about whether they can agree to let the case move forward. The court is expected to announce the plan next week.