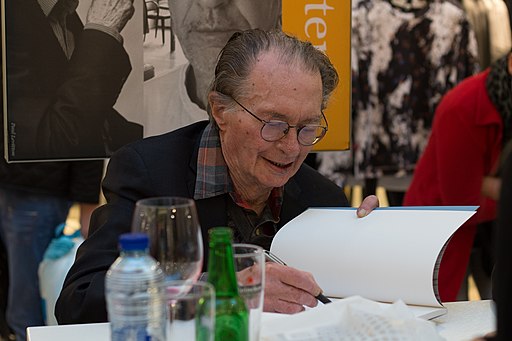 Dutch poet and author Remco Campert has died aged 92, his publisher De Bezige Bij has announced on behalf of the family.

Campert was part of the Fifties movement of experimental poets, writers and artists which included Rudy Kousbroek, Lucebert, Gerrit Kouwenaar and Karel Appel.

‘There is a lyricism which we abolish’, the Vijftigers said, and in Campert that translated itself into a playful use of the language and in the deceptive simplicity of his poems, which put his translators to the test.

Campert’s breakthrough came with Het leven is vurrukkulluk (‘Life is splendiferous’) which he wrote in 1961. It is the story of a group of teenagers in Amsterdam which, although set in the sixties, is still affected by World War II, as is much of his work. Campert’s father Jan Campert, a poet and member of the resistance, died in Neuengamme concentration camp in 1943 when his son was very small.

Campert, who lived for many years in Paris, went on to win numerous literary prizes, including the Jan Campert prize named after his father.

He won the prestigious P.C. Hooftprijs for his complete poems in 1976. Campert had been struggling with writer’s block but managed to shake it by writing Somberman’s actie (‘Somberman’s action’), about his alter ego Somberman (‘Sombre man’) who is paralysed by alcoholism and lethargy.

He then took to the theatre with former footballer and columnist Jan Mulder, and the two men wrote a popular column together in the Volkskrant until 2006.

In 2018 Campert, then 88, announced that he would write no more. ‘He is old and tired and has written enough,’ his publisher wrote at the time.