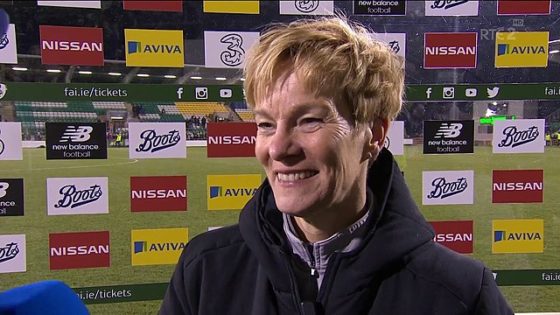 Women’s football coach Vera Pauw has asked for a public apology from Dutch football governing body KNVB for ignoring her complaints of sexual harassment  and ‘not properly recognising’ her role in putting women’s football on the map.

Pauw told the NRC that ‘enough was enough’ after the KNVB failed to act on a recent independent report which supported her allegations against a KNVB staff member.

Last week, the Republic of Ireland women’s coach shared her allegations in a tweet in English.

She has since reported the staff member to the police for rape, because ‘that is what is was’, she told the NRC. Since the events took place over thirty years ago it is deemed unlikely that any action will follow, but Pauw said ‘shame’ stopped her from going to the police at the time.

The former coach and player said she initially fell in love with the man, leading to what Pauw says amounted to rape. As time went by she told him she wanted to end the relationship. ‘He kept coming into my room until I told him, if you don’t go now I will scream. Then things changed overnight,’ she said.

This has been the toughest thing in my life but, finally, I’m ready to move on and be proud of who I am

In the wake of the affair, which the man has admitted, while denying rape, Pauw felt she was being ostracised and isolated by the KNVB.

She said that this continued after she accepted the post of coach of the Oranje women’s team in 2004. The team came third in the European Championships of 2009, a major step for Dutch women’s football.

Pauw claims recognition for the success of the women’s team by the KNVB was not forthcoming, and there were more instances of sexual harassment by another member of staff which she reported to the KNVB and now to the police.

The former Dutch coach accuses the KNVB of a ‘campaign of humiliation’, citing invitations to major football events to which she is not invited.

In a reaction, the KNVB admitted it had not ‘responded adequately’ to Pauw’s ‘reports of sexual misconduct’. It ‘recognises the mistakes mentioned in the report’ which ‘shouldn’t have happened’. The organisation has not publicly apologised, but wants to talk to Pauw about ‘avoiding similar situations in future’ and conciliatory  mediation.