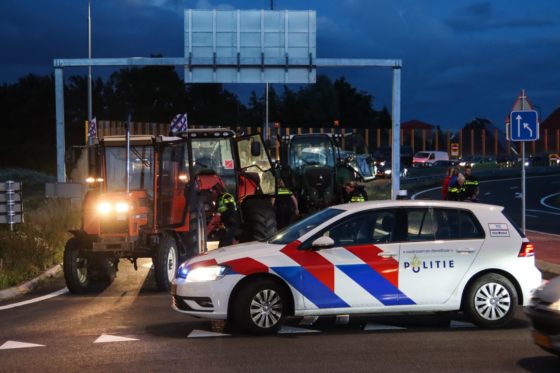 A boy shot at by police is making a formal protest Photo: ANTON KAPPERS ANP

Farmers have once more blockaded a Jumbo food distribution centre in Woerden, rolling in with around 30 tractors at 3am, a sofa, coffee and a table reports the AD.

The protest is the latest in a week of action that some farmers threatened would bring the country ‘to a standstill’ and which food retailers’ group CBL has warned will cost supermarkets tens of millions of euros.

Scores of farmers have been arrested, and an investigation is ongoing into why police shot at 16-year-old farmer’s son Jouke Hospes from Akkrum at a protest in Heerenveen on Tuesday. He was arrested after a policeman suggested he was driving his tractor towards police threateningly, however a case against him was dropped. His family has said he has considered making a formal protest against police.

The farmers are protesting at government aims to reduce nitrogen compound emissions by 50% by 2030, and by 75% in protected nature reserves known as Natura 2000 areas. The latest demonstrations were sparked by a government announcement suggesting some farm closures were inevitable in June and a detailed map suggesting which areas needed reductions from 12% to 95%.

The government has proposed Johan Remkes as a mediator, but farming organisation LTO has refused to negotiate with the veteran politician. Remkes chaired a commission that said some farmers would have to quit to meet government targets, if necessary through compulsory buyouts.

Why is too much nitrogen a problem?

Farming, particularly dairy production, is a major producer of ammonia and nitrous oxide, due to manure and artificial fertilisers used on the land.

A Council of State ruling in 2019 ruled that the Netherlands was breaching European nature conservation rules and could not use a special construction to ‘offset’ emissions in the future. The Netherlands is also expected to lose an extra EU allowance for manure.

Further cuts are expected to be announced for industries such as aviation, transport, house and road building, which also produce nitrogen oxides (NOx) and nitrous oxide (N20). Too much nitrogen in the environment is considered a threat to biodiversity.