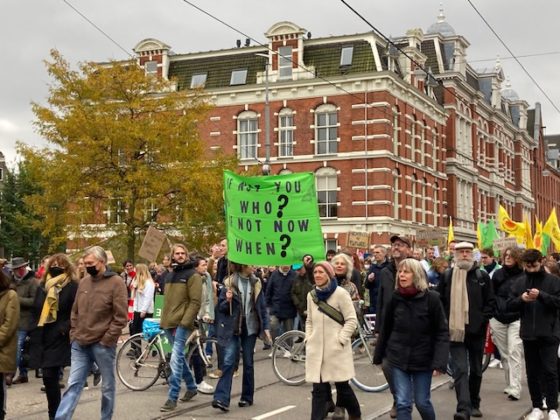 Demonstrators at at an anti-climate change march in October. Photo: DutchNews.nl

After a scorching Tuesday, the Netherlands has now clocked up its 20th tropical night, in which temperatures did not drop below 20 Celsius and passed the 25 degree mark in inner cities, RTL Nieuws reported on Wednesday.

The plaknacht, or sticky night, which may well earn itself a place on the word of the year list, will have made sleep impossible for all but those with air conditioning in the bedroom.

With more periods of high temperatures on the horizon, the Netherlands will have to adapt, and learn from hot spots around the world, experts told the broadcaster.

Wageningen University professor Sanda Lenzholzer told RTL she was repeating what she has been saying for the last 18 years: that making cities greener is the first step away from the heat-retaining concrete and asphalt which is making cities up to 13 degrees hotter than the surrounding countryside.

‘Singapore is a good example. Not only are there lots of parks but also green facades and and high rises have space for small gardens where neighbours get together. Public spaces have green roofs and misting installations,’ she said.

Air conditioning gobbles up energy and is getting in the way of having to find green solutions for keeping cool inside buildings, she said.

Poorer households in social housing have been having the stickiest of nights. ‘Housing corporations should be made to put in sun blinds, something that people themselves can’t afford,’ RTL quotes Sanda Klok of the Climate Proof City project as saying.

‘Neighbourhoods with people on lower income have less greenery, and fewer possibilities to seek out a space to cool down. More building has taken place over the last few years and in summer you can tell,’  Marian Stuiver of Wageningen University said.

Not that we have much time left, the NRC writes. ‘It’s now or never’, experts told the paper.

The current hot weather has brought the Netherlands face to face with the realities of rapid global warming and the disrupting effects of climate change, and sticky nights are the least of our worries, the paper said.

‘Climate change is here. It is happening now, not somewhere in 2100’ the paper quotes him as saying.

The Netherlands will have to adapt to a combination of climate extremes, Van Aalst said. ‘Not by just building higher dikes but by storing water to use in dry summers.’