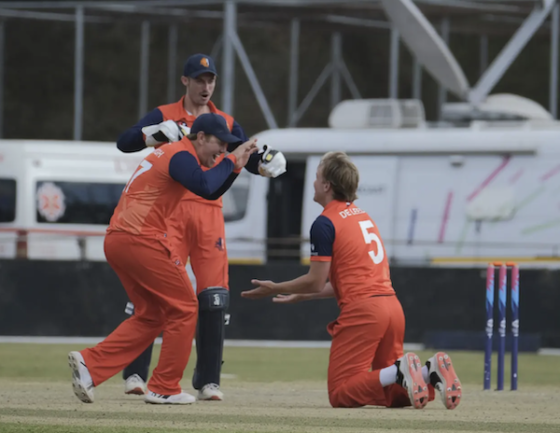 The Dutch complete a group which includes the United Arab Emirates, whom they take on on October 16, Namibia and Sri Lanka, the two sides that defeated Oranje at last year’s World Cup, with the final game on October 20. Only the top two sides from the group go through to the Super 12s.

At the qualifiers, the Dutch were drawn alongside Papua New Guinea, Uganda and Hong Kong in Group B and finished unbeaten to take on the United States of America, who finished second in Group A, in the semi-final. Having beaten them by a comfortable margin of seven wickets, the win ensured their fifth World Cup appearance but could not retain the title, losing to Zimbabwe in the final.

To punch in their ticket to Australia, the bowlers ran the show while the batters played their best hits. Logan van Beek, who finished as the leading wicket-taker in the tournament with 11 wickets in four matches, picked up his first T20 hat trick against Hong Kong and Fred Klaassen produced his career-best haul of 5/19 against Uganda.

While Zimbabwe’s Sikandar Raza was declared the player-of-the-tournament, for his 228 runs and five wickets, there was a lingering feeling that Bas de Leede, the Dutch all-rounder, who came of age with nine wickets and a career-best 91* against the USA, narrowly missed out on the award for his all-round contributions.

In the first game against Papua New Guinea itself, de Leede gave a glimpse of what was to come with an anchoring 27-ball 33 and two wickets with the ball after openers Max O’Dowd (32) and Stephan Myburgh (39) helped the Dutch get off to a rapid start to post 163-7. In response, the bowlers closed out the game in convincing fashion to bowl out PNG for 111.

Two out of two

The bowlers shone once again, hitting unplayable hard lengths for the Hong Kong batters, to make it two wins out of two. Logan van Beek returned figures of 4-27, which featured a hattrick, to bowl out their Asian counterparts for 116 before O’Dowd (45) and de Leede (36) knocked off the target with 40 balls and seven wickets to spare.

In their last league phase game against Uganda, the Dutch registered their second-highest win margin of 97 runs as they restricted their opponents to 90-9 after posting an imposing total of 187-3, courtesy a 121-run partnership between O’Dowd (73) and Tom Cooper (81*). Klaassen, then, reduced Uganda to 22-5 with his maiden T20 five-for.

In the semi-final against USA, de Leede struck an unbeaten 67-ball 91, a knock that featured nine boundaries and three sixes, to quash the American dream after the bowlers had bowled them out for 138. Paul van Meekeren and de Leede took two wickets apiece after effecting four run-outs in USA’s innings to continue their unbeaten run and qualify for this year’s World Cup.

It wasn’t quite a dream finish for the Dutch as they failed to defend their title losing the final against Zimbabwe as they crumbled to a 37-run loss. The hosts were bowled out for 132 on a slow, weary pitch in a spirited bowling effort from the Dutch spearheaded by van Beek’s 3-18 but Sikandar Raza, the Zimbabwean off-spinner, scythed through the Dutch middle-order to restrict them to 95.

‘We got what we came here for in qualifying for the World Cup, it’s just a little bit disappointing that we couldn’t perform in the final,’ Netherlands captain Scott Edwards said.

‘Really proud of the way the boys went about it, couldn’t have asked for more. Each group (at the World Cup) has its challenges so we’ll prepare for Australia and the teams we are playing against and see how we go.’

The qualification was especially significant given that the Dutch had not played a single T20I since their premature World Cup exit after three successive losses in the UAE but were battle-hardened after One-Day Internationals against full members like New Zealand, West Indies and England lately.

For van Beek, it was a ‘nice reward after a tough two-month toil against the bigger nations’.

The Netherlands’ summer of cricket continues with two T20Is against New Zealand in The Hague on August 4th and 5th with three ODIs against Pakistan to follow in Rotterdam from August 16 to 21. Head coach Ryan Campbell is expected to return to coaching after his recovery from a heart attack.