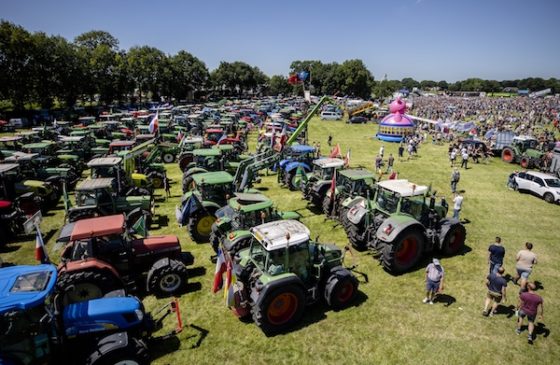 Tens of thousands of farmers have descended on a farm on the edge of the Gelderland village of Stroe to protest at the government’s plans to close a number of farms to combat nitrogen pollution.

The organisation estimates some 40,000 people are taking part in the demonstration and broadcaster NOS says drone footage shows ‘several tens of thousand’ people have shown up.

Thousands of farmers arrived at the location by tractor, causing chaos on the roads earlier in the day. Many took to the motorways, despite tractors being banned and the organisers’ call not to do so.

On the A7 at Drachten a number of farmers drove their vehicles past a police blockade by using a slip road and halted traffic by driving across all lanes.

Police also closed the A1 near Apeldoorn in both directions in an effort to let the long jams dissipate.

Farmers came from all over the country to protest, following fears of widespread farm closures, particularly those close to environmentally sensitive areas.

‘The State of the Netherlands is at war with the farmers’ republic,’ Bart Kemp, leader of farmers’ group Agractie told the crowd. Farmers’ land and property faces being seized and we must fight ‘without weapons’, he said. And he called on farmers to continue the ‘fight’ back home in their own regions.

‘I am angry about the plans but I am pleased so many people came here so we can show what we think,’ one farmer told broadcaster NOS.

Two MPs, one from the VVD and one from D66, who had been planning to attend the rally at the invitation of farmers, called off their visit on the recommendations of the counter terrorism unit NCTV.