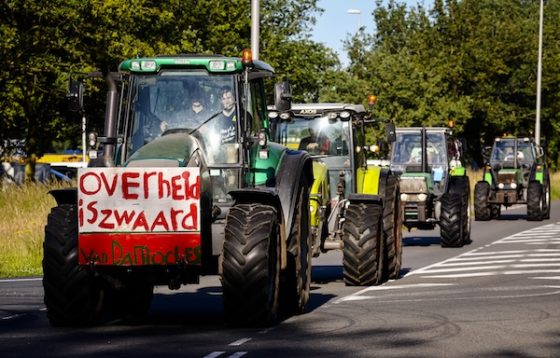 Farmers on their way to the protest rally. Photo: Vincent Jannick ANP

There is chaos on the roads in some parts of the Netherlands on Wednesday morning as thousands of farmers on tractors head for the village of Stroe in Gelderland for a mass rally against the government’s plans to tackle nitrogen pollution.

The demonstration’s organisers had urged farmers on tractors not to use the motorways but they have been widely ignored, leaving police with few options to tackle the problems. ‘We are not up to the job of tackling these vehicles,’ a police spokesman told broadcaster NOS.

‘We are trying to get the tractors off the motorways but that has to be done in a safe way. Our aim is not to hand out as many fines as possible, but to stop dangerous situations developing.’ Tractors are not allowed to use the motorways.

In central parts of the country in particular, traffic jams are mounting, and tractors have been spotted on the A2, A6, A16, A27, A32 and A50 motorways.

Police have also closed the A12 motorway at the Prins Clausplein heading into The Hague because of fears some farmers might try to protest outside parliament after all.

Farmers are angry that the government is planning to shut down some farms to meet pollution targets.

Barneveld local council has recommended people stay away on Wednesday and do their jobs from home if possible. Shops and schools in Stroe will remain closed, as will secondary schools in Barneveld because of the protest.