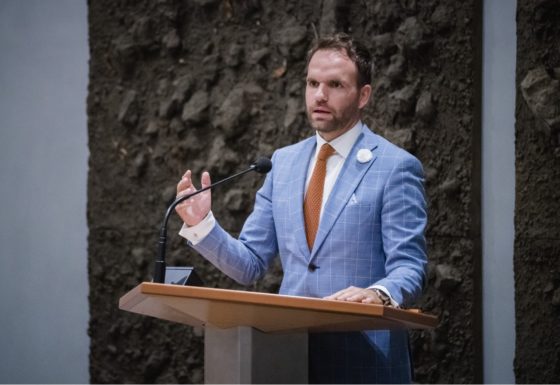 Christian Democrat MP Derk Boswijk is staying home until the end of the week after farmers’ protesters turned up at his house on Tuesday.

Boswijk’s two children, aged four and seven, were in the house when the protesters arrived, but the MP was at work in The Hague.

Last week he defied a warning by the security service to talk to farmers at a mass protest in Gelderland, but visits at his home crossed a line, he said on Twitter. ‘This sort of protest serves nothing. Stop doing it!’

Prime minister Mark Rutte broke off from his visit to the Nato summit in Madrid to condemn the increasingly violent undertone to the demonstrations.

‘These are dreadful scenes,’ he said. ‘It’s a small group of farmers – the majority are demonstrating in a civilised way, but a small group is going over the limit.’

Last night protesters gathered outside the home of the minister for nitrogen policy, Christianne van der Wal, for the third time in a week. The group dumped a lorryload of manure on the minister’s doorstep and attacked a police car that was parked in the road.

On Wednesday farmers staged more protests on the A1 motorway near Oldenzaal, stopping traffic crossing the border from Germany, and outside provincial assemblies in Zwolle and Leeuwarden.

Police said 10 people had been arrested in connection with Tuesday’s events, but did not specify what offences they were accused of. Further arrests are expected as officers go through video footage from the scene.

Willem Woelders, head of the police’s rural division, said officers did not intervene to stop the protest outside Van der Wal’s home because they were concerned for their own safety.

‘We have more serious options, up to and including firearms, but the question is if it’s sensible at that time,’ he told NOS. ‘Sometimes you have to make the decision to take a step back and wait for more colleagues to arrive before proceeding.’

Farmers’ representatives are demonstrating against the government’s plans to reduce nitrogen compound emissions by making cuts to the agriculture sector. Van der Wal has said that some farmers will have to give up their business.

Hardliners such as Mark van den Oever, leader of Farmers Defence Force, have vowed to keep up the pressure by blockading motorways and doorstepping officials until the cabinet abandons its plans.

‘Let’s spread the word that [coalition parties] the CDA and the VVD can’t go ahead with the high treason that they are inflicting on the rural sector,’ he said in a video on Twitter.

Other farming organisations such as LTO Nederland have called on their colleagues to protest within the limits of the law through ‘appropriate and worthy’ demonstrations.