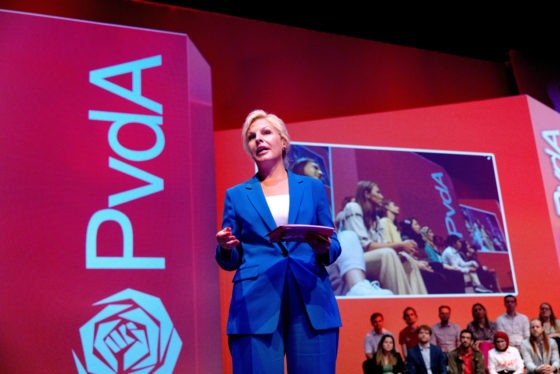 Opposition parties Labour (PvdA) and GroenLinks have formed an alliance to fight next year’s provincial elections with a joint list of candidates.

Members of both parties voted by overwhelming margins at separate conferences at the weekend to pool their resources in next year’s elections, which also determine the make-up of the next senate. The plan was backed by more than 75% of Labour members and 80% of GroenLinks’s rank and file.

Labour leader Attje Kuiken said: ‘I think it’s great that the members have said clearly that they want to stand up for secure living standards that people are really missing now everything is so uncertain: an affordable house, rising energy prices.’

GroenLinks leader Jesse Klaver said: ‘We have voted today for a breakthrough in co-operation on the left that we haven’t seen since the 1970s. This is fantastic news for the Netherlands.’

PvdA and GroenLinks currently hold 17 seats in the Lower House of Parliament and 14 of the 100 senate seats.

The deal is short of the merger that has been advocated by some in the party, but brings them closer together following an agreement in January to work together in 15 key policy areas.

The PvdA has shrunk in the last 20 years from a party that regularly won more than 35 seats in parliament to just nine at the last two elections, while GroenLinks lost six of its 14 MPs at the last general election.

A poll by Maurice de Hond at the weekend indicated that the parties would each win 12 seats at a general election, collectively one more than the largest party, the right-wing liberal VVD.

Most senior party figures backed the idea of a joint list, but there were dissenting voices in the PvdA in particular. Former leader Ad Melkert said co-operating with GroenLinks in the senate would ‘not deliver a single extra vote’. ‘We need to take those votes from elsewhere, and we need to do it as the PvdA.’