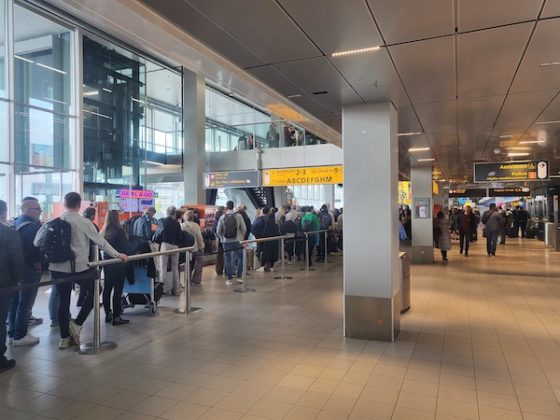 Amsterdam’s Schiphol airport has introduced new measures in an effort to keep queuing to a minimum during the busy summer period and over the Whitsun weekend.

In particular, passengers should not arrive more than four hours before their flight is due to depart and ticket checks have been introduced at the steps, lifts and escalators to make sure only passengers with flights leaving within the allotted time can enter the terminal building.

‘If you come four hours or more ahead of your flight, the check in desks won’t be open, so we hope this measure will keep people out of the queues,’ a spokesman said.

The airport authority has also urged travellers to bring as little hand baggage as possible to speed up security checks.

Earlier this week, Schiphol airport reached an outline agreement this week with unions to improve pay and conditions – which will add up to €840 to salaries in the holiday period.

A walkout by baggage handlers in April caused massive disruption on one of the busiest Saturdays of the year, the start of the May school holiday, while a shortage of security staff has led to long waits at baggage checkpoints in recent weeks.

The deal between the airport’s management and the FNV union is designed to prevent further strikes but underlying problems remain, including understaffing and scheduled maintenance work on two runways at the start of July.