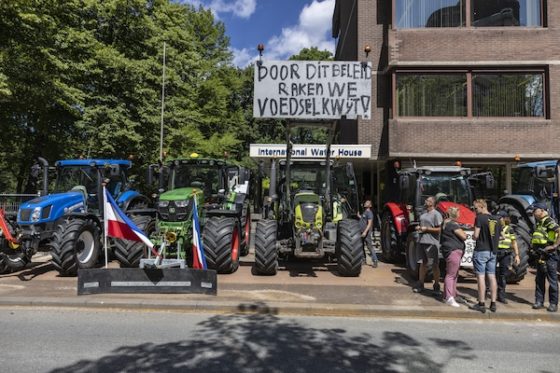 Farmers in the centre of The Hague. Photo: Laurens van Putten ANP

Prime minister Mark Rutte has told protesting farmers that creating dangerous situations on the roads and the intimidation of politicians and others is totally unacceptable and ‘nothing to do with the right to demonstrate’.

The measures which the government is planning to introduce are ‘far reaching’ for a lot of people, but are also necessary to tackle the problems, Rutte said at a short press conference ahead of a parliamentary debate on the plans to meet pollution targets.

Justice minister Dilan Yeşilgöz denied that the police are being slow to tackle the problems. ‘There have been arrests, lots of fines have been handed out, and if need be, police can also confiscate tractors,’ she said.

The police, justice ministry and mayors are working together to control the protests as they arise, she said. ‘But sometimes it is necessary to de-escalate situations to prevent the risk to others,’ she told reporters.

Meanwhile, a few farmers have been gathering outside the parliamentary complex following a call to action by radical farmers’ groups.

Some have also brought livestock with them as well as their tractors.

Officials in The Hague have warned that the police will intervene if the farmers block roads or cause problems for other residents.

Tuesday is the second day of action by farmers who are angry that some may have to close their operations to meet national pollution targets.

‘On June 28, we will show what halving the number of livestock in the Netherlands means,’ one call to action said. ‘We will make it clear what choices are facing farmers thanks to this government’s sick-making strategy’.

However, national farmers association LTO Nederland has also called on protesting farmers to take ‘appropriate and worthy’ action and not to break the law.

‘This is the way we can keep public support,’ LTO chairman Sjaak van der Tak said.

At the same time, Van der Tak called on MPs to ‘intercept in the impossible, unrealistic policy drawn up by the minister for nature and nitrogen. There should be ‘no impractical 50% reduction [in nitrogen emissions] by 2030,’ he said in a YouTube statement.

On Monday, farmers blocked roads, threatened to dump manure at a nature reserve, chopped down trees and drove their tractors to town halls. The protests started on Tuesday with hay bale fires alongside several motorways, which also led to delays and traffic jams.