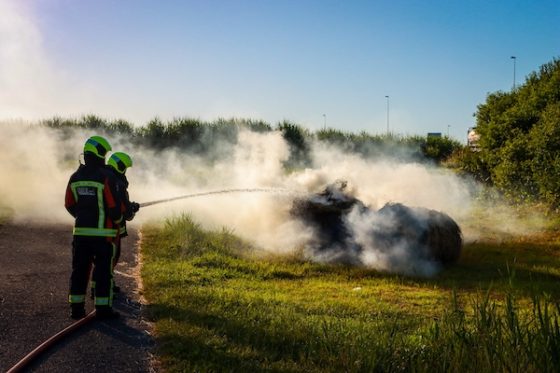 Farmers set fire to bales of hay along the A12, A50 and A7 motorways on Tuesday morning, at the start of a second day of protests against government plans to force some farms to close because of pollution.

The smoke is causing problems for motorists in some places and long jams built up  particularly on the A12 between Woerden and Gouda, fire officials say.

There were also problems with burning bales on the A2 by Breukelen and the A31 between Harlingen and Leeuwarden, officials from the government’s roads department said.

On Monday, farmers took to their tractors and blocked roads, causing traffic chaos in some places well into the evening.

Farmers drove their tractors to several town halls and spread manure outside the town hall in Apeldoorn. Others turned up at the home of nature minister Christianne van der Wal, but this time she was not home.

One farmer also cut down over 100 ancient willows, some of which had been planted by his great grandparents, in protest at what he called the government’s ‘clearances’.

That action led to widespread condemnation, and researchers from Follow the Money, who are looking into the subsidies paid to the agricultural sector, said the dairy farmer, Floor de Jong, has had nearly €440,000 in subsidies over the past eight years.

Farmers are protesting against the government’s plans to reduce the size of the agricultural sectors to comply with European conservation laws.

A Council of State ruling three years ago has forced the government to come up with wide-ranging measures to cut emissions from nitrogen compounds such as nitrous oxide and ammonia by up to 70% in some areas.

Christianne van der Wal, the minister responsible for tackling the so-called nitrogen crisis, has said some farmers will have to give up their businesses.