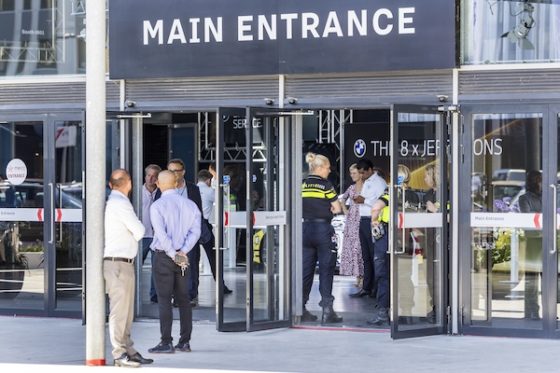 Police are hunting two men after an armed robbery at the Tefaf art fair in Maastricht, during which visitors were apparently threatened with guns. Two Belgian nationals have already been arrested in connection with the heist, and had an unspecified amount of jewelry with them.

One begins trying to smash the case with a sledgehammer while another holds what looks like a gun, which he pointed at visitors to keep them at a distance. Eyewitnesses said more than one of the gang was carrying a weapon.

A short while later, one of the gang can be seen putting something in a bag, at which point they jog off.

The gang managed to get away, but details of how they left the MECC are still unclear. According to broadcaster RTL, they may have made off via the restaurant.

Eyewitnesses told the Telegraaf newspaper the gang appeared to have a specific target. ‘All the stand holders were led outside by security quickly,’ Robbert van Ham from the Jaski Art Gallery told the paper. ‘There was no panic, even if it was a little tense because there was talk of guns being involved.’

The police said later on Tuesday the two men who had been arrested were Belgian nationals aged 22 and 26.  They were stopped in a grey car with Belgian plates on the A2 motorway.

The Tefaf fine art fair runs until June 30 and attracts dealers and buyers from all over the world.

The Tefaf organisers said in a short statement that no-one had been hurt in the robbery and that it would make no further comment.