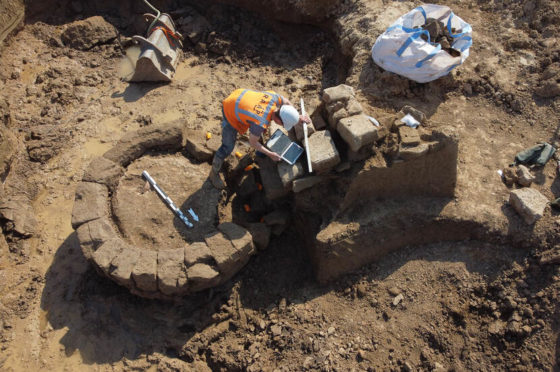 Archaeologists have uncovered unique votive stones and a wealth of artefacts at a newly discovered Roman shrine at Herwen- Hemeling in Gelderland.

The site forms part of the the Roman Limes which marked the the northern border of the Roman empire two thousand years ago. To guard the border the Romans built fortifications, watchtowers and roads and the area was declared a UNESCO world heritage site in 2021.

Remains of other Roman shrines have been found at Elst and Nijmegen, also in Gelderland, but none as well preserved and complete as the temple complex now being investigated at Herwen-Hemeling.

The site was discovered last year when volunteer archaeologists who were exploring the area stumbled on a pebble bed which they thought might be part of a Roman road.

A subsequent dig set up by the government archaeological agency Rijksdienst voor Cultureel Erfgoed then yielded several intact fibulae from the first century AD. ‘That gave us the idea we were on to something important,’ project leader Eric Norde told broadcaster NOS.

‘We could date them quite easily because the Romans were followers fo fashion and the quickly changing styles of the brooches reflect that,’ he said.

Apart from the temple building and the buried remains of sacrifices to Mercurius and Romano-Germanic deity Hercules Magusanus, archaeologist also found a number of votive stones – small altars dedicated to the gods by the soldiers as a way of giving thanks for granting their wish.

‘These votive stones are very rarely found in the Netherlands. They have been almost perfectly preserved, including the lettering. ‘That will enable us to to find out who put up each stone and identify the deity is was dedicated to,’  Norde said.

The discovery of a well with steps leading down into it has led the researchers to believe it may have been a place where ritual cleaning took place. The lettering on the votive stones and coins found in the well show the it was there around 220-230 AD.

The many artefacts – ranging from bits of painted wall, statues of gods, jewellery, roof tiles, and the unique altar stones, will be keeping specialists busy for years, archaeologist Tessa Groot said. ‘We will find out which units were stationed here, but also what the soldiers who came here to put up the stones did to maintain the site.’

A selection of the finds will be exhibited on the Valkhof Museum in Nijmegen from Friday.