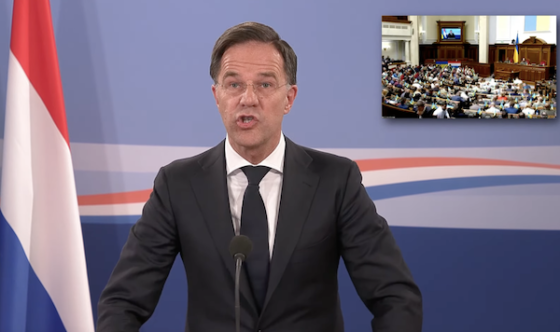 A still from the video message

The package of sanctions imposed on Russia is unprecedented, Rutte said. ‘I believe we should take the next big step as quickly as possible and stop buying Russian oil,’ he said. ‘Let me say clearly that the Netherlands is ready to take this step together with our partners and allies, without delay.’

The Netherlands has already said it plans to phase out the use of Russian gas by the end of the year. And earlier this month, the European Commission said it wants all EU members to stop all Russian crude oil imports within six months and only import refined products until the end of the year.

Such a move would require all EU member states to vote in favour.

During the 12 minute speech, Rutte said that he wanted to show that the Netherlands and the EU stand with Ukraine and will remain doing so. ‘And we will remain with you, every inch of the way until peace, freedom and democracy are restored in Ukraine and justice is done,’ he said. ‘There can be no other outcome.’

Rutte spoke of the ‘ruthless, unjust and destructive’ Russian aggression which he said was ‘based on false reasoning and utter lies’.

Russia’s military power is enormous which makes the fighting power of the armed forces and the courage of the people of Ukraine even more remarkable, he said. ‘It is like David against Goliath,’ he said. ‘And we all know who won that fight.’

Russian president Vladimir Putin made a serious miscalculation in assuming he could ‘isolate Ukraine and divide the democratic forces in the west with a quick military victory,’ Rutte said. ‘The opposite has happened. The forces of democracy in the west are more united than ever.’


He also spoke of the bond between the EU and Ukraine but did not comment on Ukraine’s wish for fast track membership, something which Rutte opposes.

‘It is clear to me that the family bonds is growing closer every day,’ he said. ‘And we must seize every opportunity to strengthen this cooperation between Ukraine and the EU and … work together on recovery and reconstruction in a way that brings Ukraine closer to the European Union.’