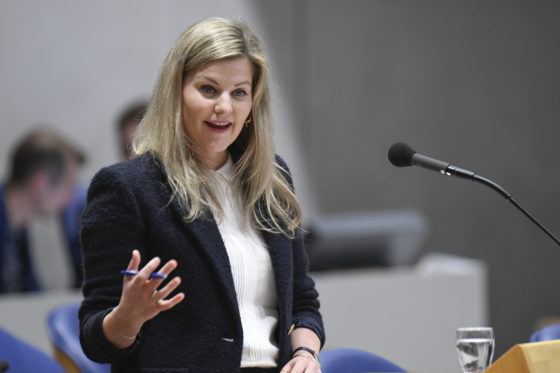 The cabinet has insisted Ukraine will not be offered a ‘fast-track’ route to join the European Union after EC president Ursula von der Leyen said the first stage could be completed this summer.

Foreign trade minister Liesje Schreinemacher told parliament on Tuesday that membership was a ‘long and technical process’ and Ukraine would have to meet the same criteria as other applicants.

Last week Von der Leyen presented Ukrainian president Volodymyr Zelenskyy with a questionnaire that represents the first stage of applying for membership, with the promise that completing it would ‘not be, as usual, a matter of years, but a matter of weeks’.

Member states closer to Ukraine including Poland and Lithuania have signed declarations calling for the country to be given EU candidate status and pushing for the accession procedure to be speeded up.

But prime minister Mark Rutte and his cabinet have repeatedly poured cold water on its ambitions, insisting that cutting corners would risk setting a precedent for other aspiring members such as Turkey and Montenegro.

Schreinemacher said the Copenhagen criteria – which require candidate members to have stable democratic institutions, a functioning market and the capacity to implement EU law – could not be compromised.

‘We await the opinion of the European Commission,’ she told MPs. ‘It’s not the case that Ukraine will become a member of the EU overnight. There are no diversions or shortcuts.’

Opposition parties were critical of Von der Leyen’s public statements, with PVV MP Vicky Maeijer calling for her to resign as commission president, but Schreinemacher replied that she was ‘doing what she can and doing it extremely well.’

She said the cabinet was examining possible ways to strengthen Ukraine’s accession treaty through measures such as removing tariffs on more exports.

The Dutch government negotiated a declaration explicitly stating that the accession treaty, signed in 2014, did not guarantee a route to EU membership as a concession to the ‘no’ vote in an advisory referendum on its decision to ratify the treaty.