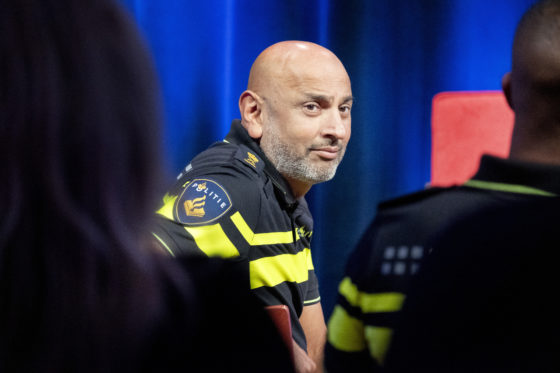 Midden-Nederland police chief Martin Sitalsing: ‘We have a lot of work to do.’ Photo: ANP/Jan Boeve

The police chief in charge of improving diversity in the force has acknowledged that it has a ‘structural problem’ with racism and discrimination, in response to a documentary focusing on officers with minority ethnic backgrounds.

Six police personnel spoke of their experiences of being ignored, bullied or even dismissed after they complained about workplace discrimination. The documentary, De Blauwe Familie, is being broadcast on Monday evening on the NPO2 channel.

Martin Sitalsing, head of the Midden-Nederland police division, called the documentary a ‘painful’ exposé and said: ‘We have a great deal of work to do in this area.’

Sitalsing and Noord-Nederland police chief Gery Veldhuis were given the task last year of making the Dutch police force more diverse and inclusive, with a target of raising the proportion of officers with a non-western origin to 35% in five years.

Sitalsing has said that efforts to recruit more minority officers will only succeed if the police can offer them a safe working environment.

In the documentary former Rotterdam-based inspector Peris Conrad said he had experienced discrimination throughout his 26-year career with the force.

He said: ‘In my first year at the police training college somebody took a picture of me. Then they drew bars on it and wrote underneath: “There you go, our monkey in a cage.”‘

Sitalsing and Veldhuis are responsible for a five-year plan that also requires police to cut out ethnic profiling through awareness training and an app that allows supervisors to monitor who is being singled out for routine checks and why.

Last year the force attracted much criticism from within its own ranks for the decision to give written warnings to a group of five officers in Rotterdam who used racist terms in a WhatsApp group.

Sitalsing said the force could no longer ‘accept that people discriminate or racist behaviour’. He called on senior officers to set standards and show leadership. ‘As custodians of those standards we have our work cut out,’ he said.

De Blauwe Familie, a 2Doc documentary produced by KRO-NCRV, is broadcast on NPO2 on Monday, May 23, at 8.30pm.