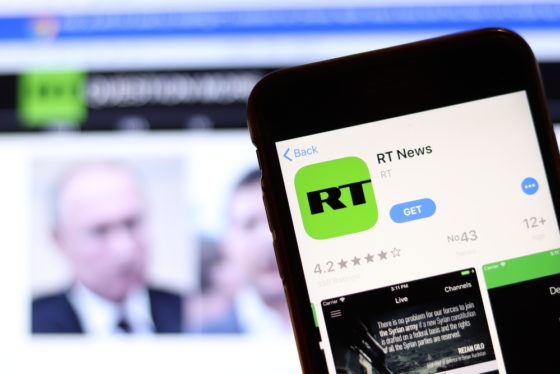 Internet providers and press freedom campaigners are to ask the European Court of Justice to overturn the ban on Russian-backed TV channels.

The Dutch journalists’ union NVJ and organisations such as Bits of Freedom say the online blockade undermines democracy and the principle of net neutrality.

EU governments agreed in March to ban cable channels RT and Sputnik across the region following Russia’s invasion of Ukraine. The channels are seen as a key component of Moscow’s effort to spread disinformation and influence public opinion in the west.

Most Dutch internet providers have since removed RT from their cable packages and blocked access to their websites.

But campaigners say the decision was ‘hasty’ and limits to freedom of information should be debated and regulated by parliaments. ‘It’s disproportionate and opens the door to more blockades of this type,’ said Anco Scholte ter Horst of Freedom, one of the internet providers bringing the lawsuit.

Ter Horst said the ruling clashed with the obligation on service providers to guarantee net neutrality, which was enshrined in the Dutch net neutrality law in 2012, because it required them to restrict sites on the basis of their content. ‘This is a danger for the open internet,’ he told NOS.

‘We’re no fans of RT and Sputnik,’ Thomas Bruning, secretary of the NVJ, said. ‘It’s state propaganda. But if government leaders can ban independent information, it affects democracy and the rule of law in general.

‘It’s up to government and parliaments to come up with regulation, after which judges and media authorities apply the rules. No ministers have said unilaterally: we’ve devised a new rule and we will apply it immediately.’