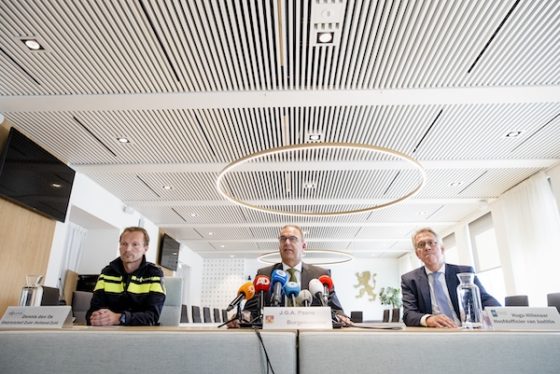 The 38-year-old man arrested for shooting two people dead at a day centre for disabled people in Albasserdam on Friday morning, may have been involved in another deadly incident in Vlissingen on May 4.

Rotterdam’s chief public prosecutor Hugo Hillenaar told a press conference on Friday evening that shortly after his arrest, police discovered the suspect was the same man wanted by Zeeland police following the death of a shoemaker in the port town two days ago.

‘There is enough evidence to think the cases are connected,’ Hillenaar said.

In addition, he said, the suspect had also been a patient at the farm, where adults and children with psychiatric disabilities or who need to ‘get back on track’ go for occupational therapy.

The two people who survived the shooting are seriously ill in hospital.

‘Alblasserdam is in shock,’ mayor Jaap Paans told the press conference. ‘Many people witnessed this terrible event. I have spoken to relatives, clients, volunteers and workers and they have spoken about the fear and the sorrow they experienced.’

The man who has been arrested has been named by the AD as 38-year-old John S from the nearby village of Oud-Alblas. Police have not confirmed the name but did say the suspect did not have a criminal record but that he was a known troublemaker.

He was arrested shortly after the shooting in a nearby park and was armed when he was picked up, police spokesman Dennis den Os said.

Police have not yet said how the man in the Vlissingen case was killed or formally identified him, but other shopkeepers told local media that he was a ‘strange character’ who kept to himself.

The zorgboederij, or care farm, is a concept which allows people with problems or disabilities to work with animals or on the land, as occupational therapy. The farm where the shootings took place looks out onto the Kinderdijk wind mill park, which is popular with tourists.

The deadly shooting came less than 12 hours after two young women from the town were killed in a car crash.