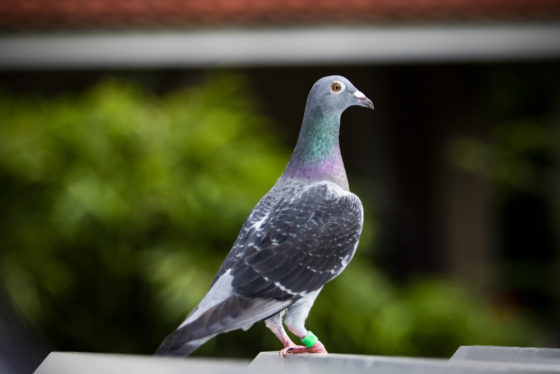 A file photo of a homing pigeon. Photo: Depositphotos.com

A homing pigeon which disappeared 15 years ago during a race has finally returned to its owner in Utrecht, the AD reported on Thursday.

Owner Leo Snel made the discovery when taking some pigeons to a race in Compiègne in northern France. Before stepping into his car he glanced at his pigeon coop for the final time and spotted a strange black bird.

He told fellow club members about the arrival. ‘I said “it can’t be mine in 300 years, because I don’t have a black male any more”.’

The bird was still there when he got home and so Snel decided to check its ring. The ring gave the date 2007 and a number which, when entered in the national homing pigeon register, turned out to be linked to him.

Snel says he can’t remember how he lost the bird but suggests it may have followed other pigeons to their coop in search of food and has been used to breed since then. ‘A pigeon is fertile for about 15 years… perhaps that is why he has been released again,’ Snel told the paper.

Snel, who has been keeping pigeons since he was 12, said he had lost birds for two or three years before, but never 15.

A spokesman for the homing pigeon owner’s group Nederlandse Postduivenhouders Organisatie told the paper it was not impossible for a bird to find its way home after 15 years, but that it was a very rare occurrence.

Snel is currently in the process of stopping his old hobby now he is retiring and it transpires he is allergic to pigeons anyway.

He and his wife plan to go travelling, and a new home has already been found for the pigeon that came back. Until then, Snel says, he will have his own enclosure, with a female bird for company.