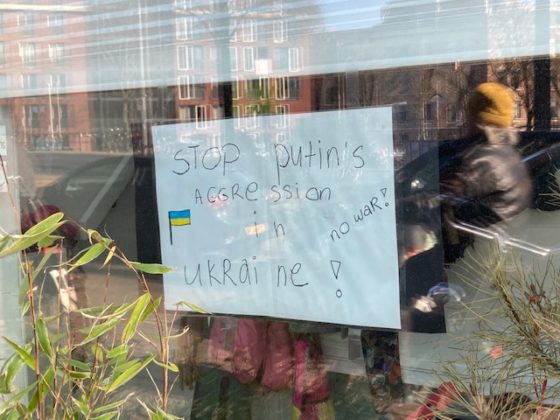 A sign in support of Ukraine in an Amsterdam window. Photo: DutchNews.nl

Former minister Stef Blok, who has been charged with overseeing the government’s efforts to impose sanctions on Russians on the official EU sanctions list, has told MPs he is unable to say how much in assets has now been seized.

The Netherlands is not bottom of the EU list, but that he cannot make the ranking public, the Telegraaf quoted Blok as saying on Thursday.

The most recent total – €516 million – was published by foreign minister Wopke Hoekstra on April 1. Since then, the Netherlands has also seized 20 Russian owned boats and super yachts.

The European Commission said two weeks ago that EU members had frozen €30 billion in Russian assets but did not make individual country totals public.

According to the Telegraaf, Blok is not able to share the EU ranking, even though MPs want to see how the Netherlands compares with the rest of Europe.

A spokesman for Blok told the paper that it is impossible to make a comparison because of the ‘enormous differences’ in what assets can be frozen.

‘Portugal has only frozen €242 million, Poland €30.5 million, ’ the paper quoted the spokesman as saying. ‘We hope all the member states will be transparent about they have put the sanctions  into practice.’

The Dutch total is still well below the €80 billion in Russian assets which the Financieele Dagblad suggests are based in the Netherlands, of which €45 billion belongs to people on the sanctions list.