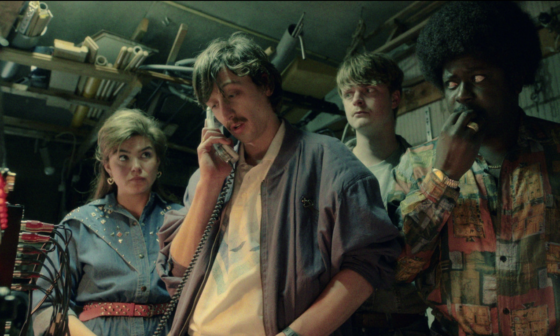 A new Dutch series comes to Netflix on Friday night, set in the world of telephone sex lines in Amsterdam in the late 1980s.

Dirty Lines is a six part series, described by the Volkskrant as an ‘irresistible binge fest’ about the rise and inevitable fall of the 06 phone line.

It focuses on fictitious company Teledutch, set up by Amsterdam brothers Frank and Ramon Stigter and loosely inspired by George and Harold Skene, who launched the first 06 sex phone line in the Netherlands.

The series, says the Volkskrant, does try to do slightly too much. It is a ‘history of the sector, 1980s nostalgia, coming of age and sex education in one’. But while not every story line is interesting the series is ‘smooth and happy’, the paper said.

The Parool says the series offers ‘delightful scenes and a striking picture of Amsterdam in the 1980s’ with the arrival of hip hop, the Roxy and the first ecstasy pills. The first sex lines are a goldmine, the paper points out, ‘until the tax office starts to take an interest.’

The main sex line worker, student Marly, is played by Joy Delima (27) who in reality has had her own column ‘sex with Joy’ in the Volkskrant magazine for the past 18 months.

Other cast members include Julia Akkermans, who won a Golden Calf with the film Niemand in de Stad while the Stigter brothers are played by Minne Koole and Chris Peters (Penoza and Moordvrouw).

Dirty Lines is the second Dutch series made specially for Netflix. The first, Ares, was set in the world of a macabre student fraternity.

There has also been a Netflix series based on the popular Dutch children’s book The Letter for the King.