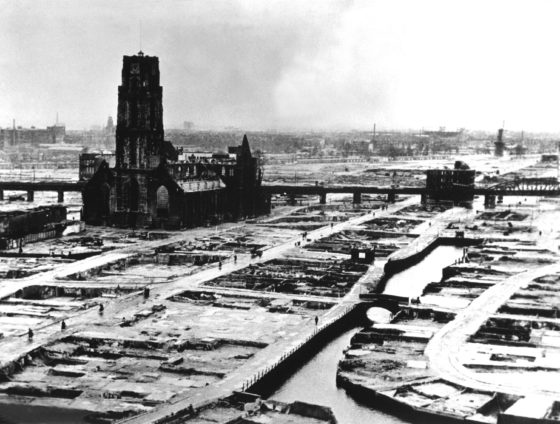 The badly damaged Laurenskerk stands alone after the bombardment of May 14. Photo: National Archives via Wikipedia

Rotterdam has published an official list of 1,150 people who are known to have died when the city was carpet-bombed at the outbreak of the Second World War in 1940.

The list is the first official record of victims of the aerial assault on the port city in May 1940, which was ordered by Hermann Göring to force a quick surrender.

The heaviest bombardment was on May 14, when 711 people died and almost the entire city centre was flattened, but the bombings began on the first day of the German invasion on May 10.

The youngest of the 1,150 victims was a baby of just 19 days, Clarisa van Druten, while the oldest was 91-year-old Francina Bouwman. Eleven families lost five or more members in the course of the attack.

Most of the victims died instantly or within a few days, but not all: Maria Teljeur lost her fight for life on September 14, a few days short of her eighth birthday.

The list includes 210 Dutch and 125 German soldiers who died during the five days of fighting in Rotterdam.

Walt Schulze, of the ancestral research organisation Stichting Voorouder, drew up the list in conjunction with the city archives. ‘This is about acknowledgement and recognition,’ he told local news network Rijnmond.

‘Everyone talks about the bombardment on May 14, but the real war began on May 10. In those few days several bombs fell on places like Waalhaven airfield and Noordereiland.’

Jantje Steenhuis, of the city archives, said younger generations were more interested in the human stories behind the casualty figures.

‘After the war there wasn’t much interest in people’s traumas,’ she said. ‘They didn’t talk about it. The third generation have questions about grandpa so they come to us.

‘With this list we are taking the victims out of anonymity and giving them back their identities, and that’s important for their relatives.’