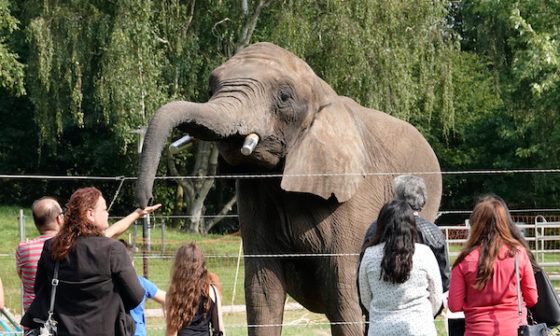 Animal rights organisations are accusing former agriculture minister Carola Schouten  MPs of flouting the Dutch ban on the trade of wild animals for circuses by sanctioning the sale of an elephant to Hungary.

The dispute centres on Buba, the last circus elephant in the Netherlands, which was owned by the Freiwald circus family and went into retirement by the 2015 ban on performing wild animals.

In 2020, MPs voted to allow the 45-year-old elephant to remain with the circus family after the Freiwalds rejected a suggestion to move the animal to Elephant Haven, a sanctuary for retired elephants in France on the grounds that it would be happier here.

However, claiming they could not longer afford to care for the animal, the Freiwalds have sold Buba to the Kimba Elefant park in Hungary, the Telegraaf reported last month. The park, owned by the Caselly circus family, is part zoo and part circus.

The answers to parliamentary questions from animal rights party PvdD MP Frank Wassenberg ‘only confirm what we already knew,’ animal rights organisations Bite Back and Animal Rights NL said in a statement.

‘After all the sanctimonious drivel about allowing Buba to remain with her circus family in the Netherlands… Buba has been flogged to a park in Hungary where she will be forced to perform tricks again,’ the organisations said.

The current agriculture minister, Henk Staghouwer, could not confirm if Buba had been sold and if so, how much for but admitted the necessary papers had been provided to enable the elephant to travel to Hungary.

He also said that according to his information, the elephants at the park are ‘trained in the presence of visitors and perform tricks with their keepers’.

Slaghouwer expressed regret that the option to take the elephant to the retreat in France had been refused.

‘The objective of the 2015 ban on the use of wild animals in circuses was always to rehabilitate the animals in an environment with knowledgeable staff. It would not be in Buba’s best interest to be used to perform for an audience again,’ Staghouwer said.

The animal rights organisations said Buba had been the victim of ‘populist sentiment and political ineptness’ and have said they are considering legal action.

The Netherlands found itself in a similar situation with Morgan the orca, which was sold to an amusement park on Tenerife where she has been bred and forced to perform tricks, despite the official agreement.