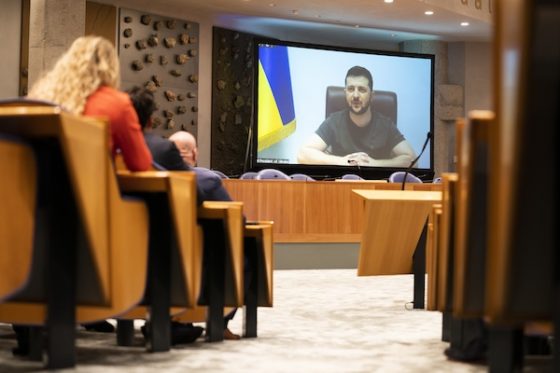 Ukraine’s president Volodymyr Zelenskyy has urged the Netherlands to stop all trade with Russia and to support a boycott of Russian gas, in a video address to the Dutch parliament on Thursday morning.

Zelenskyy pointed out that the Dutch purchase of Russian gas is contributing billions of euros to Putin’s war effort. ‘We need tough sanctions, so that Russia has no chance of waging war further into Europe,’ he said.

He also urged the Netherlands to provide more weapons for Ukraine, in addition to those already sent. ‘You are leaders in supporting us,’ he said. ‘But we need more weapons to drive out the occupier.’

As expected, Zelenskyy also referred to events in Dutch history, such as the bombardment of Rotterdam in 1940 and the downing of flight MH17 over eastern Ukraine. ‘That deed cannot be forgiven,’ he said. ‘Those who gave the order should be held to account.’

He also commented on the events of April 1, 1572, when the Spanish were driven out of the town of Den Briel, in what was a turning point in the 80 Years War. ‘Tomorrow you will remember driving out tyranny 450 years ago,’ he said. ‘The tolerance and diversity in Europe which followed is now under attack.’

The president also turned his attention to prime minister Mark Rutte, who had been granted permission by MPs to attend the session, and asked him to support Ukraine’s wish to join the European Union.

‘Our membership depends on you, Mark,’ he said. Rutte has so far resisted efforts to speed up Ukraine’s admittance to the EU, although he has stressed that the country ‘is part of the European family’.

The Dutch parliament is the 14th addressed by Zelenskyy in his virtual tour of global capitals.