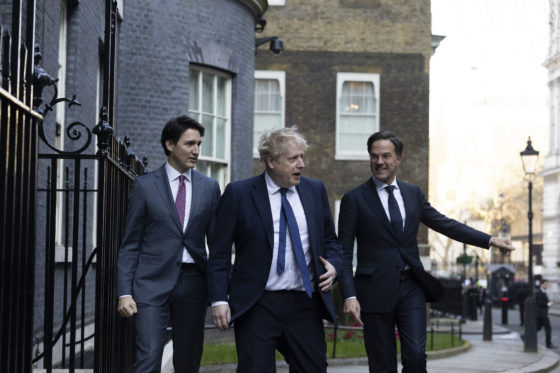 Prime minister Mark Rutte has rejected calls for a ban on importing Russian oil and gas following the invasion of Ukraine.

In a joint press conference with his British and Canadian counterparts, Boris Johnson and Justin Trudeau, in London on Monday, Rutte said Europe needed to become less dependent on Russian energy, but a ban would have ‘enormous consequences’.

The three leaders also ruled out any kind of direct intervention by Nato to stop the invasion because the risk of escalating the conflict.

‘What the west can do, we are doing,’ said Johnson. ‘What we’re not going to do is intervene militarily in Ukraine.’

Ukraine’s president, Volodymyr Zelenskyy, has called in recent days for a global boycott of all Russian products, including gas and oil, to squeeze its economy.

US Secretary of State Anthony Blinken has also said America, which is less dependent than Europe on Russian imports, had been talking to European allies about ‘the prospect of banning the import of Russian oil.’

On Tuesday Russia threatened to cut its gas supply to Germany if the west bans oil, a move which analysts say could double prices to $300 a barrel.

Rutte said Europe wanted to ‘drastically reduce’ its dependency on Russian fossil fuels, but said that ‘at the moment that the dependency is, to a certain extent, still there’.

He said he was disappointed that existing sanctions had not yet had ‘the desired effect’ on Russia, but expected that they would hurt Putin’s government eventually.

Rutte acknowledged that not confronting Russia meant Ukraine would continue to be battered by war for ‘some time’, but ruled out measures such as a no-fly zone over Ukraine that would escalate the conflict.

‘We are delivering humanitarian aid, sending defensive supplies and providing logistical assistance, but we will not intervene. That is too great a risk for the Netherlands and the rest of the world.

‘Unfortunately that means in practice that we are going to continue to see these terrible images for some time.’