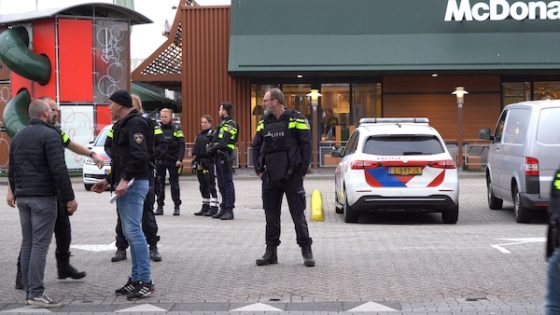 Police outside the McDonalds after the shooting. Photo:ANP/Hollandse Hoogte/Persbureau Meter

The two men shot dead inside a busy McDonalds fast food restaurant in Zwolle early on Wednesday evening have been named by the Telegraaf as brothers Ali and Huseyin Torunlar.

The two men, aged 57 and 62, were of Turkish Kurdish origin and ran several grill rooms in Zwolle, the paper said.

The shooting happened at around 6pm when the two men were sitting eating together at a table. Eyewitnesses told the Telegraaf an as yet unidentified man entered the building, ordered food and sat at the table next to his victims. He then opened fire.

Dozens of people, including several children, were in the restaurant at the time and fled when the shooting started, leaving food and toys scattered behind them.

Zwolle mayor Peter Snijders described the shooting as shocking. ‘This was a question of extreme violence in a place where it would not be expected,’ he said. Victim support services have been drafted in to talk to those who witnessed the shooting.

Update: Police said on Thursday morning they had arrested a 32-year-old man who had reported to police in Deventer on Wednesday evening in connection with the shooting.