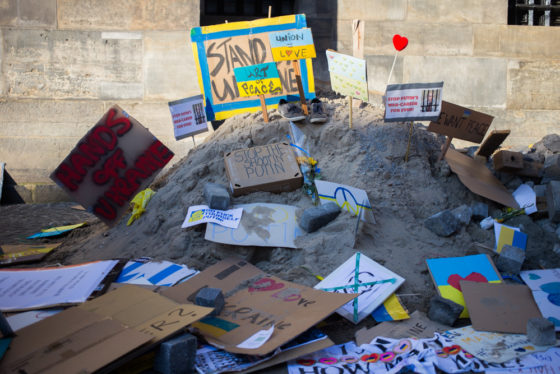 Posters left behind after a pro-Ukraine demonstration. Photo: Anne Lakeman

The Dutch bar association has called on its members to be ‘extra alert’ when it comes to Russian clients who may want to get round US and EU sanctions, the Financieele Dagblad reported on Tuesday.

The association has warned that Russians may try to get round sanctions by moving their assets from the Netherlands and said that Dutch lawyers should not cooperate with such requests.

In addition, the association is warning that lawyers should report any unusual Russian transactions to the financial security service FIU, the paper said.

Russian individuals and companies are thought to have billions of euros in assets parked in the Netherlands and that alone is enough reason to expect efforts will be made to get round the sanctions, association official Evert-Jan Henrichs said in a special newsletter to members.

A number of big Dutch firms, many of which based in the Zuidas business district, have Russian companies and oligarchs as clients.

Investigative news website Follow The Money has tried to establish how much Russian money and assets is in the Netherlands and was told by the Dutch central bank that in 2021, 488 letterbox firms (or shell companies) were Russia-focused.

The website points out that Russian president Vladimir Putin has been attempting to tackle tax havens such as the Netherlands for years and six months ago canceled the tax treaty from the start of this year.

Nevertheless, the website said, seven Russians on the EU and US sanction lists still have possessions in the Netherlands with assets ranging from €55m to almost €2bn.

Energy company Gazprom is also a major player in the Netherlands, not just as a supplier of gas.

Gas distribution group Wingas has storage and pipelines all over northwestern Europe while Wintershall Noordzee, which is half owned by Gazprom, has 29 gas extraction installations off the Dutch coast, making it one of the larger players.

Gazprom, which has a major sales operation in Den Bosch, also owns more than 13% of Dutch energy storage facilities.

Meanwhile the port of Rotterdam has noted that some 15% of its throughput is Russia-related and this means EU and US sanctions against Russia will have an impact on its operations.

Some 62 million tonnes of the 470 million tonnes of freight and bulk items handled by the port have a Russian connection, the port authority said in a statement. Roughly 20% of Russian coal and oil products, 25% of the liquid natural gas and 30% of crude oil is imported via Rotterdam.

Some 10% of Rotterdam container transport is also linked to Russia and the country also exports steel, copper, aluminium and nickel via the Dutch port.