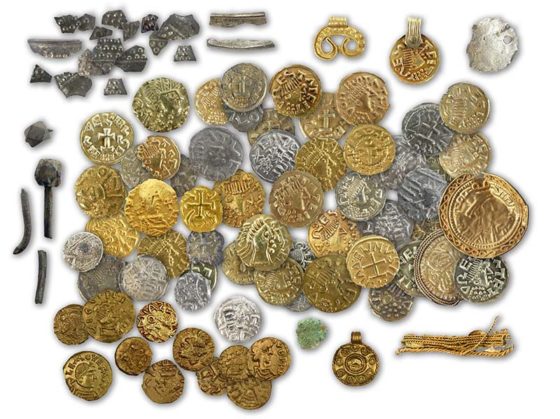 Amateur archaeologists have found dozens of gold and silver coins dating from the 6th and 7th centuries at the Springendal country estate in Twente, shedding light on an area whose early history is largely unknown.

The site where the coins were found, along with jewellery and pieces of precious metal, was not one where people lived or farmed but did have a couple of poles which may denote a religious shrine of some kind.

Archaeologist Jan-Willem de Korte, who took over the dig following the discovery of some of the coins, told the Volkskrant the objects could be offerings to Wodan and Donar, the gods that were venerated at the time in the area, which is close to the border with Germany.

The coins were clustered around several groups of poles, with the early 7th century gold tremisses around one group and the later silver sceattas around another.

In many cases buried treasure means the owners had to flee in times of war or some other catastrophe and were never able to return to retrieve it but that is not the case here, De Korte said.

Treasure is usually buried near a home but De Korte’s team dug up half a hectare around the site and found no proof of habitation.The coins were also found to have been in circulation for a short period, making it unlikely that one person buried both the early and the later coins as well as taking the trouble to cluster them around the poles.

According to Frans Theuws, a professor of medieval archaeology, who was not part of the investigation, the site may have had another function, perhaps to celebrate marriages or important meetings which would then be concluded by offering valuables.

The Springdal treasure will be on show at the Rijksmuseum Twenthe in Enschedé from February 18 until October 30. It will then go to the archaeology museum in Leiden which is now the new owner.