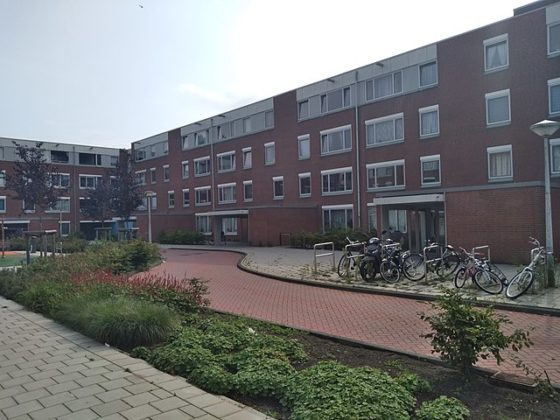 Part of the Nieuwlandhof complex, where the man lived. Photo: Ceescamel via Wikimedia Commons

A man in Amsterdam-Zuidoost who was last seen by his neighbours three years ago has been found dead in his home.

Neighbours had called in the police and housing corporation several times but officials said they saw no reason to break into the flat, until this week.

The man, who spoke no Dutch, would say hello to the woman next door but few people knew him personally, RTL Nieuws said on Friday.

‘I walk past his house every day and I would sometimes look in, but it never occurred to me that he could be dead,’ Adri Drubbel from the Holendrecht residents group, told the broadcaster. ‘There was no smell and no flies to see, perhaps because his bedroom window was always open.’

Housing corporation Stadgenoot said it had sent someone to check out the situation several times ‘but no one ever opened the door’. ‘We had no indication anything was wrong and his rent was always paid,’ a spokesman said.

Eventually Stadgenoot asked the police to check out the situation but they concluded there was no reason to break down the door. The housing corporation later decided to clear the property, thinking it was no longer inhabited.

A bailiff found the man’s body and called the police.

Drubbel said he did not understand why officials were not more concerned. ‘The bank would see you had not spent any money in three years,’ he said. ‘Of course, people can vanish for a few weeks, but three years?’

Another neighbour told the Parool: ‘The loneliness is the worst of all. How can someone be so lonely here. If only someone went round for a chat, so see how he was.’

In 2013, police Rotterdam found the body of a woman who had been dead in her home for 10 years without anyone realizing. Because the woman was not officially dead, she continued to receive her pension and her rent and electricity bills were automatically paid.