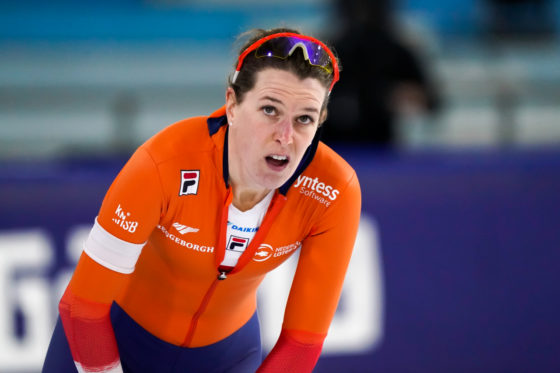 Ireen Wüst confirmed her status as the greatest speed skater in Olympic history with her sixth gold medal in the 1,500m.

Wüst set an Olympic record of 1:53.28, but had to wait until the final pair to see if Japanese rival Miho Takagi could better her time. Takagi finished 0.44 seconds slower to claim the silver medal, the same outcome as four years ago in PyeongChang.

The bronze medal went to Wüst’s team-mate Antoinette de Jong, who partly made up for missing out on the podium at her favourite distance of 3,000m. Marijke Groenewoud just missed out on a medal in fifth.

Wüst broke down in tears in her post-race interview as she paid tribute to her former team-mate Paulien van Deutekom, who died of cancer three years ago at the age of 37. ‘I miss her every day, and at moments like this it’s extra hard,’ she said.

‘These are the moments when we’d be screaming together on the phone and now we can’t. Maybe she’s having a party up there.’

Her win on Monday takes her career total to six gold, five silver and one bronze medal. She is due to race again next Tuesday in the team pursuit before bringing down the curtain on her Olympic career on Thursday in the 1,000m.

‘At the moment It feels like being in a dream, a sort of fantastic film,’ she said. ‘I’ve given a lot of interviews and been asked a lot of questions and it’s slowly sinking in what I’ve done. It’s pretty unique.

‘To stand here and say as a 19-year-old rookie, this is unbelievable, and then do it again at 35 – it’s just unbelievable.’