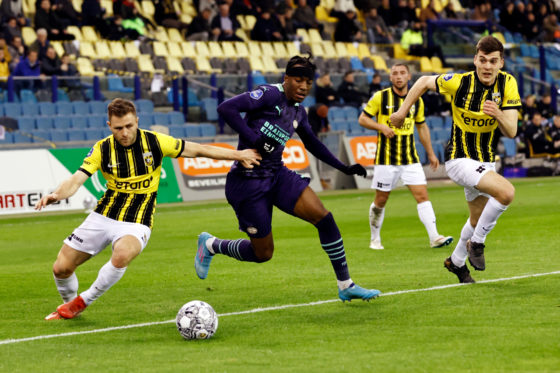 Ajax and PSV both notched up 5-0 wins at the weekend to maintain their five-point gap at the top of the Eredivisie.

Twente came within inches of taking an early lead in the ArenA when Ricky van Wolfswinkel headed against the bar, but after half an hour Davy Klaassen broke the deadlock in characteristic style, popping up at a corner to bundle in from close range.

A hat-trick in the second half by Sébastian Haller, taking his season’s total to 16, confirmed Ajax’s dominance. The champions have won their last nine league matches with a goal difference of 38-1.

PSV won by the same scoreline on Saturday at Vitesse Arnhem with a starring role for English teenager Noni Maduele. His dribbling run opened up the defence, allowing Erin Zahavi to tuck away the opener after four minutes, and he was instrumental again in the passing move that led to Cody Gakpo’s third in the 28th minute.

Coach Roger Schmidt was pleased to see his team finishing clinically in the first half, in contrast to previous games this season. ‘The game was basically decided by half-time,’ he said. ‘In the second half we did a good job, defended well and we deserved the win.’

Feyenoord stay a point behind PSV thanks to a 2-0 win at RKC. Orkun Kökcü scored the opener when he beat the onrushing goalkeeper Etienne Vaessen to a long pass and stroked the ball into the empty net.

Defeat for Twente allowed AZ Alkmaar to move up to fourth place with a 4-1 win at Go Ahead Eagles, with defender Sam Beukema scoring twice against the club that sold him in the summer.

There were wins for all three teams at the bottom of the table, with PEC Zwolle taking the points from a seven-goal thriller in Leeuwarden. Daishawn Redan set up two early early goals before tapping in the third in the 56th minute, after Cambuur had drawn level just before half-time.

A second-half goal by Younes Namli against Willem II was enough for 17th-placed Sparta to earn their first league win since November 6 and move to within four points of their opponents.

Fortuna Sittard, in 16th, won in Groningen for the first time since 1987 thanks to a goal by central defender Dimitrios Siovas, who took full advantage when the home side failed to clear a corner in the 80th minute.

Heerenveen extended their losing streak to six matches with a 1-0 home defeat to NEC, while a fine finish by Kaj Sierhuis was enough to earn Heracles all three points at home to Utrecht.