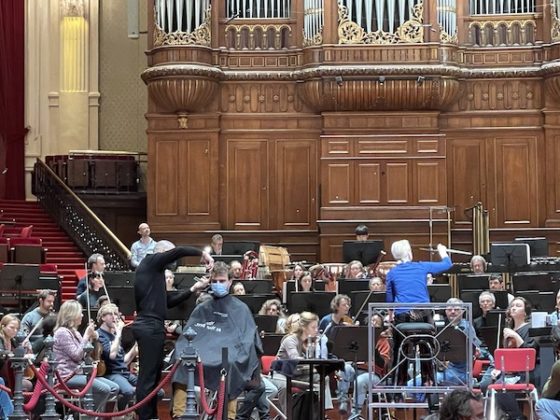 Having a haircut at a Concertgebouw orchestra rehearsal. Photo: Senay Boztas

The mayors of the Netherlands’ biggest cities say they will act to enforce the coronavirus rules during Wednesday’s protests to draw attention to the continued closure of museums, theatres and cinemas.

The 25 safety board chairmen have agreed to ‘take the same approach’ to making sure the rules are not broken, a spokeswoman told the AD. ‘It was clear very quickly that they could not turn a blind eye and accept [the protests],’ she said. ‘No matter what they feel about the cultural sector, this does conflict with the coronavirus rules.’

Some 70 museums, theatres and cinemas all over the country are staging a protest against their continued closure on Wednesday by turning into temporary hair dressing salons, nail bars and gyms for the day.

The restrictions were lifted on hairdressers, fitness centres and sex workers last weekend, but the cultural sector is still regarded as too risky by officials.

On Wednesday, the Concertgebouw was open for business and people having a haircut could listen to a rehearsal by its orchestra. Other museums and concert halls have also said they will defy the closure order.

Comedians Diederik Ebbinge and Sanne Wallis de Vries came up with the plan, drawing in a string of famous names, including Youp van ‘t Hek, Brigitte Kaandorp, Claudia de Breij and Dolf Jansen. They will all perform at the Kleine Komedie theatre in Amsterdam, which has been turned into a hair dressing salon for the occasion.

Amsterdam mayor Femke Halsema told theatre owners that they can expect a visit if they press ahead with their performances. ‘You have organised your protest in a ‘public place’ which should be closed,’ the mayor said.

Wallis de Vries and Ebbinge say they will go ahead with their impromptu hair salon plan. ‘Even Mark Rutte has said he understands civil disobedience,’ Ebbinge said. ‘But still they are going to enforce the rules.’ The cultural sector, he said, has to ‘stop being the best behaved child in the classroom’.

The protest organisers also point out that the decision by cafes and bars to open in protest last weekend was largely ignored by officials. ‘And every so often demonstrators herd onto the streets to protest “against coronavirus” but that too is ignored,’ they said in a statement.

‘Until now we have stuck to the rules… but we do not understand the priorities which were announced at the last press conference. We hope that the enforcement which has been threatened will not materialise until the end of our protest, or not at all.’