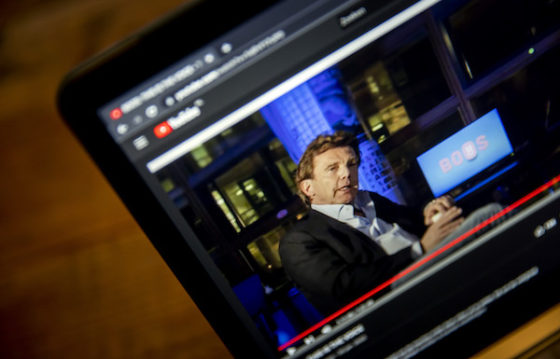 Media mogul John de Mol has been widely criticised for appearing to lay part of the blame for the continued sexual harassment of female contestants on talent show The Voice of Holland at the feet of the women themselves.

De Mol told the documentary makers in an interview that ‘the broader problem is that women do not tend to report this sort of thing immediately.’

‘They seem to feel some sort of shame. I don’t know what that is. I would like to explore that,’ De Mol said.

That comment led to a full page advert in the AD from the female staff at Talpa, De Mol’s production company, saying ‘Dear John, It’s not the women who are the problem.’

Elsewhere, De Mol’s comments were slammed for being insensitive and for blaming the victims.

In Trouw, expert in gender related violence Renée Romkes called the comment ‘a classic example of reframing, a rhethorical trick’. De Mol appears to have sympathy for the shame of the women, Romkes said ‘but what he is really saying is: it is their problem, not mine.’

Former coaches and presenters of the show joined in the criticism on social media, with Chantal Janzen saying the revelations ‘made her puke’ while Wendy van Dijk, another former presenter declared herself ‘speechless’.

Singer Ilse de Lange, a former coach on the programme, said ‘it is horrible to see people who want to make the dream to make it as an artist come true end up in such a nightmare. It is a good thing this will now be thoroughly investigated.’

So far 19 women have identified musician and partner of De Mol’s sister Linda Jeroen Rietbergen as a sexual predator, while one of the show’s directors was mentioned by 15 women. Singer Marco Borsato allegedly touched six contestants, including three under-age girls inappropriately.

One former contestant has filed a report with the police accusing rapper and coach Ali B of raping her eight years ago, when she appeared on the show as an 18-year-old. The woman told her story on Boos in a disguised voice, saying she ‘froze’ during the attack and that it had taken her years to realise she was not to blame.

Lawyer Ruth Jager said it is common for women to remain silent after being abused. ‘It’s totally unjustified but they feel partly responsible. (…) What de Mol should have said is: keep your dirty paws to yourself,’ she told the Volkskrant.

It is not yet clear if De Mol can be held liable for what has happened. ‘There will be a discussion about whether or not there there is a case to be made for rape in the case of Ali B. Those are valid questions,’ lawyer Richard Korver said, adding he hoped the discussion would also focus on ‘how we as a society handle this’.

The public prosecution office has called on women who have experienced sexual harassment while appearing on The Voice to report to the police, not to the lawyers of current owners of the format ITV. ‘Investigations will be carried out by a specialised team. Proof may be difficult to produce but it is certainly not impossible,’ the department said.