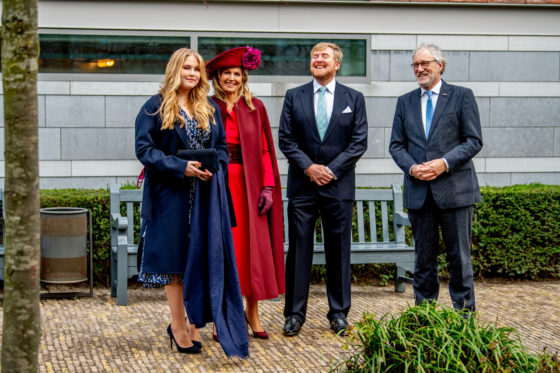 A confident Princess Amalia has addressed the Raad van State for the first time in her capacity as the official heir to the throne.

The princess was sworn in to the government’s most senior advisory group one day after her 18th birthday on Tuesday, marking the moment she can succeed her father, King Willem-Alexander, as monarch.

The princess was led into the ballroom of the Kneuterdijk palace in The Hague on the arm of her father, the Raad’s ceremonial chairman, and accompanied by her mother queen Máxima who is also a member.

The king, Queen Máxima and now Princess Amalia do not have a vote but can attend meetings. Amalia is not expected to come to the weekly gatherings because she is currently on her gap year.

The meeting opened with a speech by the king welcoming his daughter to the Raad. Addressing her father as ‘chairman, if I may call you this’, the princess said she hoped the moment when she would take over as chair would be ‘a long way into the future, although I realise it could be as soon as tomorrow’.

She went on to say she would endeavour to be ‘a good student’. ‘I have much to learn, about the tasks of the government, about the administrative processes,’ she said.

Vice-chair and de facto leader of the Raad van State, Thom de Graaf, who has been known to support a purely ceremonial role for the head of state, and applauded the abolition in 2012 of royal involvement in the formation process, remarked on the changing nature of royalty.

‘This is the former residence of Willem II. It is now the seat of the Raad van State. This ballroom is where its members meet. That is how it goes,’ he said.

De Graaf said he hoped princess Amalia would have the opportunity to explore ‘other worlds’ like any 18-year-olds and would only take her place as chairwoman after ‘a very long time’.

The ceremony was concluded in the French garden of the Kneuterdijk palace, where the princess planted a royal lime tree.