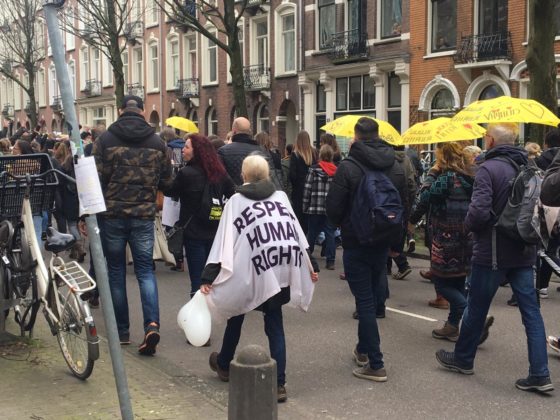 A demonstration against the coronavirus rules which had been scheduled to take place on January 2 has been banned because the organisers ‘refused’ to cooperate with plans to ensure it could take place safely.

The decision to ban the protest was taken by the city’s mayor Femke Halsema, together with the police and public prosecution department.

The city said in a press release that the organisers of the demonstration, who had claimed 25,000 people would attend, had indicated they were ‘out for confrontation’.

‘The police also have strong indications that people and groups who were out for trouble and prepared to use violence were planning to mix in with the demonstrators,’ the statement said.

The demonstration could have gone ahead if the organisers agreed to limit numbers to 3,500 and not to march through the city. Given they were unwilling to do this, there was ‘no choice other than to ban the demonstration in the interests of public health and to prevent disorder.’

The Omicron variant of coronavirus is spreading rapidly in the Dutch capital and now accounts for 80% of cases.

‘Amsterdammers are staying home as much as possible, companies have been forced to close their doors, theatres and cinemas are shut,’ Halsema is quoted as saying by the Parool. While the freedom to demonstrate is an important right, she and the police had ‘no confidence that the organisers would ensure the demonstration was properly organised.’

The Parool said that a spokesman for the mayor said the decision was unconnected to the planned strike by riot police which was set to coincide with the demonstration.

Organiser Michel Reijinga told the paper the decision was scandalous and that he had offered his full cooperation.

Several hundred people were arrested in riots across the Netherlands last January after the curfew was introduced. There was more trouble, sparked by organised troublemakers in Rotterdam, in November.