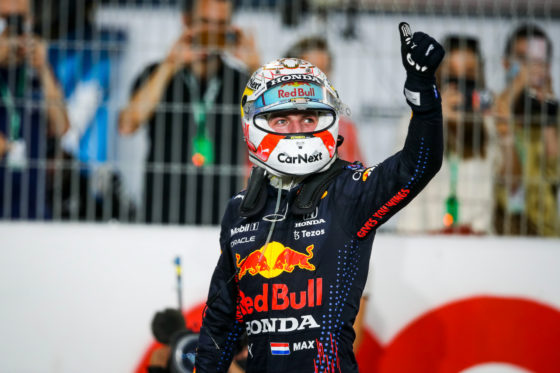 Verstappen: ‘anything can happen’. Photo: Newscom/Hoch Zwei via ANP

Max Verstappen said he was happy to limit the damage after starting from seventh place in the Qatar Grand Prix to maintain his narrow lead in the drivers’ championship.

The Dutchman made up three places on the first lap and quickly moved in to second position, but was unable to make serious inroads on Lewis Hamilton’s Mercedes.

Verstappen also bagged the bonus point for the fastest lap to hold an eight-point lead over Hamilton with two races to go, in Saudi Arabia and Abu Dhabi.

‘In a weekend when you lack pace and still finish second and grab that fastest lap point, I think that’s good,’ Verstappen said after the race.

‘We just need to try and stay focused and there are two races to go and as you can see a lot of things can happen. Anything is possible.’

Verstappen was penalised five grid places after the stewards ruled he had ignored a double yellow flag at the end of the qualifying session, while Red Bull’s team boss Christian Horner was given an official warning for hitting out at the race marshals over the incident.

Horner said his comment about a ‘rogue marshal’ flying the flag after Pierre Gasly suffered a puncture at the end of the session were made ‘under the pressure of competition’.

I’d like to make it clear that marshals do a wonderful, wonderful job,” Horner told Sky F1.’And my frustration in what I voiced earlier wasn’t at marshals, it was at a circumstance. So if any offence was taken by any individual, then obviously I apologise for that.’