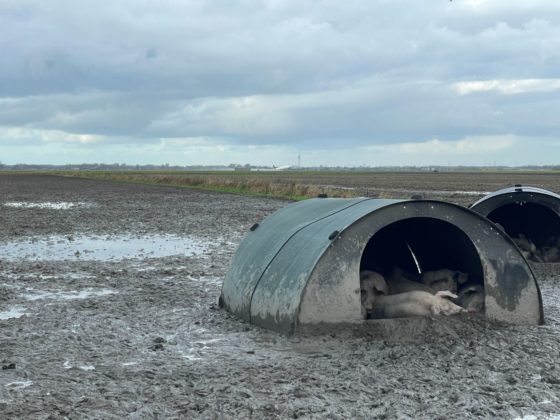 Schiphol airport is considering using groups of pigs in future on fields nearby the airport, to clear agricultural detritus and deter birds.

Birds flying near aircraft that are taking off pose a flight hazard as they can get sucked into engines, occasionally causing catastrophic damage. Near Schiphol airport, there were 259 such ‘bird strikes’ between November last year and October, according to figures from the ILT Human Environment and Transport Inspectorate.

In conjunction with the Dutch Ministry of Infrastructure, agricultural supply agency RVR Loonbedrijf and outdoor pig farmers Buitengewone Varkens, the airport group has just completed a six-week pilot to see whether a small group of pigs can clear beet fields and deter birds like geese.

Willemeike Koster, a spokeswoman for Royal Schiphol Group said that after an ‘informative’ trial period, the airport is considering whether it is feasible to deploy pigs on a larger scale. ‘Amsterdam Airport Schiphol is located in a polder landscape, with a lot of water, grassy meadows and rich farmland,’ she said. ‘These factors all contribute to Schiphol being a popular roost for birds. However, birds constitute a risk for aircraft.

‘Our first impression is that few geese were spotted in the [pigs’] area. And the pigs did their job by eating the crop residues, which are now gone. All data collected from the bird radar and visual observations (among other things) will be analysed in the coming months.’ 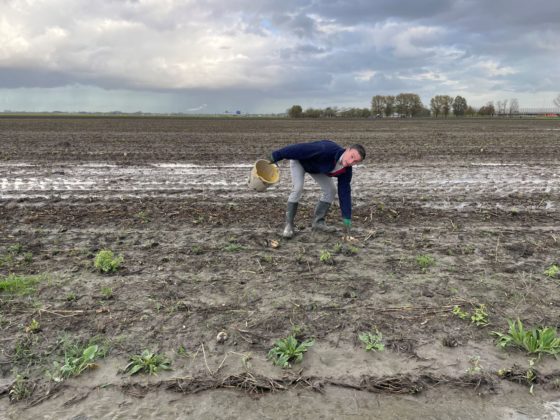 Leftover sugar beet on a nearby field Photo: S Boztas

Co-owner of Buitengewone Varkens Stan Gloudeman, told DutchNews.nl: ‘They want to do everything possible to chase away geese in a natural way – they can shoot them, catch them, chase them away. Geese like beet, and when it’s left on the fields, they flock to eat it. Over there are 30 geese enjoying the beet, but those geese are a danger to aircraft. Here, the pigs have eaten up the beet so that the geese stay away.

‘If this works, they have said that next year they will work with more fields, although maybe 50 or so [pigs]: we can make the electric fence larger so that they can cover all of the beet fields.’

Two years ago, a KLM Boeing 747-400 was hit by one such suspected ‘bird strike’, and had to return to the airport, and this was also the cause of the 2009 US Airways near-disaster when captain Chesley Sullenberger landed on the Hudson River.