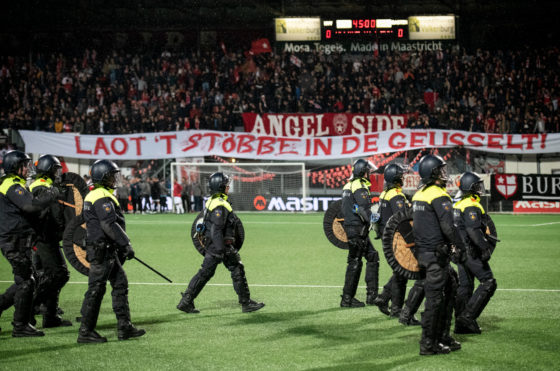 Riot police at the match between MVV and Roda JC. Photo: ANP/HH/Bart Quaedvlieg

Justice minister Ferd Grapperhaus will discuss the recent surge in violent incidents around football matches at a meeting with the football association KNVB this week.

On Friday evening eight people were injured during riots at the Limburg derby between MVV Maastricht and Roda JC Kerkrade that caused the game to be suspended. Fireworks and smoke bombs were let off in the stadium and riot police had to disperse rival supporters.

Six police officers and two stewards were injured in the violence, while 10 people aged between 19 and 50 were arrested. One officer needed hospital treatment as chairs and boards were used as missiles in fighting outside the stadium.

Stewards at PSV’s Phillips Stadium were assaulted by FC Twente supporters on Sunday as they tried to remove a visiting fan who had smuggled a firework into the ground.

The match between Excelsior and FC Eindhoven was also briefly suspended at the weekend after objects were thrown onto the pitch, while in recent weeks police were attacked during clashes between Vitesse Arnhem and NEC Nijmegen supporters and Feyenoord hooligans raided a restaurant where Union Berlin executives were dining.

Feyenoord director Mark Koevermans last week announced his resignation, citing threats from fans and attacks on his home as the reason for his decision.

Paul Depla, the mayor of Breda who is the spokesman for all municipalities with professional football teams, said an extra meeting had been convened on Monday to discuss the situation ahead of a scheduled meeting with Grapperhaus on Friday.

‘Unfortunately it’s not the first incident this year of violence in and around stadiums,’ Depla said. ‘There are real concerns about the increased violence in stadiums. In recent weeks it’s got much worse.’

The KNVB said it was not planning to bring in measures such as banning away fans at this stage, but has not ruled out tougher sanctions if the situation does not improve.