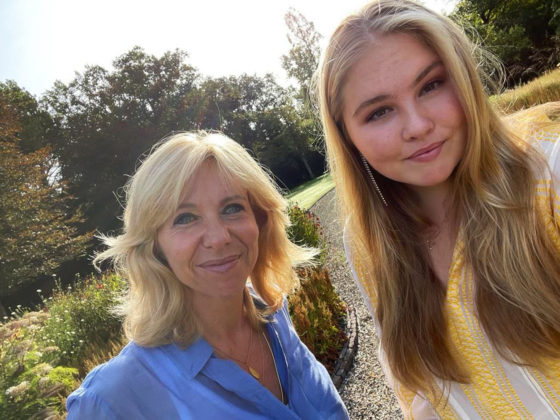 A book to celebrate the upcoming 18th birthday of heir to the throne princess Amalia reveals a ‘a young girl who sees her future role as an honour and loves a tiara’, Dutch media said.

The book, by actress and comedian Claudia de Breij, is the latest in a line of books written about the Dutch heirs to the throne on reaching 18. Amalia would then be at the age at which she could become queen if anything happened to her father, king Willem-Alexander.

De Breij interviewed the princess six times at her Huis ten Bosch home and they had frequent mail and whatsapp exchanges.

Like the British royals, Amalia professed an interest in mental health, which she said was ‘as important as physical health’.

The princess said that she talked to a psychologist when she was younger and still does whenever she feels the need.

‘I don’t think it’s a taboo, and I don’t mind talking about it in public,’ she said. ‘It’s completely normal to talk to a professional, particularly in the light of what happened to my aunt,’ she said referring to the suicide of her mother’s younger sister Inès.

The book also reveals that Amalia came to terms with the fact that she would be queen  when she was 14. On telling her father he laughed, saying it had taken him much longer than that, she told the Breij.

Asked about her future role she said she hoped she would be able to ‘prevent difficult situations by diplomacy’ and that she would ‘dedicate my life to the Netherlands’.

Apart from matters relating to the throne, De Breij quizzed the princess about her hobbies. The princess spends her spare time horse riding, skiing, and singing, which De Breij notes, she does very well.

On being shown the finished product by De Breij via zoom she called her ‘a good comedian’ for making her laugh whenever they spoke and said the book was ‘cool’.

It  the first time the princess, who renounced the €1.6m annual allowance due to her on her 18th birthday, has spoken so openly about her life, royalty correspondent Albert Bos said.

‘This is a book about an 18-year-old who wants to be part of society, not rise above it. And that is perhaps a good thing at a time when the continuation of the monarchy is being questioned,’ Bos said.